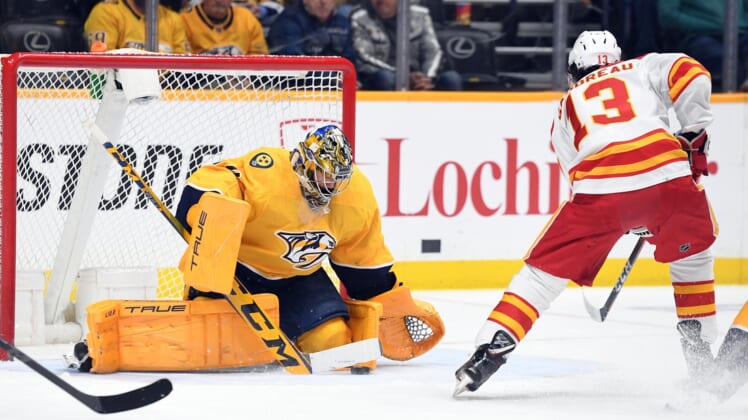 Matt Duchene became the first ever 40-goal scorer in Nashville Predators history and Mikael Granlund potted the shootout winner in a 3-2 home victory over the Calgary Flames on Tuesday.

Filip Forsberg also scored for the Predators (44-28-5, 93 points), who strengthened their hold on a Western Conference wild-card playoff spot. Goaltender Juuse Saros made 19 saves through overtime.

Andrew Mangiapane scored both goals for the Pacific Division-leading Flames (47-20-10, 104 points), who have a 10-point edge in the chase for the division title.

Goalie Dan Vladar stopped 25 shots prior to the shootout. Matthew Tkachuk recorded one assist to give him 99 points for the season and Johnny Gaudreau collected the 70th assist in his 108-point campaign.

Following an entertaining overtime after his team blew a 2-0 lead, Granlund scored the lone shootout goal with a wrist shot just as it appeared he’d attempt a deke.

Saros denied all three Flames players in the shootout.

The Predators drew first blood when Forsberg opened the scoring at 7:23 of the second period, notching his 39th of the season with a one-timer from the top of the left circle.

Then Duchene, whose previous season high for goals was 30 while with the Colorado Avalanche in 2015-16, made it a 2-0 game at 12:09 when he flailed at a loose puck and chipped it off a Flames defender and into the net.

Mangiapane was in the right spot twice for a pair of goals that drew the Flames even. First, he was there for a rebound when Gaudreau’s shot was stopped for a power-play goal with 4:47 remaining in the second period.

Mangiapane then tied the game with a similar goal at the 6:40 mark of the third period. Tyler Toffoli’s attempt was blocked, but Mangiapane collected his 34th goal of the season by finding the puck and tucking it past the goalie. Mangiapane’s previous career high for goals in a season was 18.