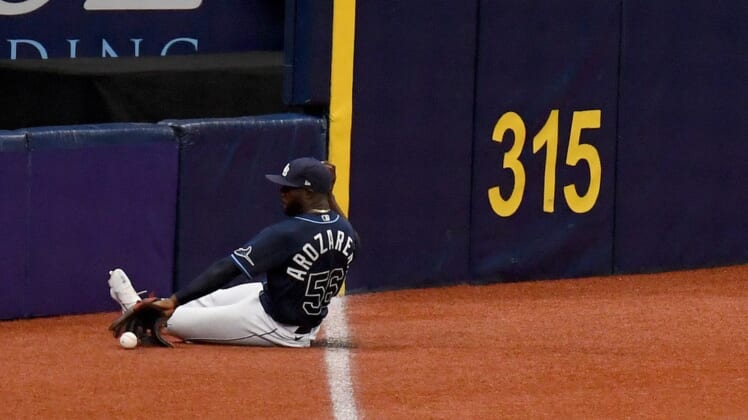 Matt Chapman doubled home Jed Lowrie with two outs in the top of the ninth inning Thursday afternoon, breaking a tie and giving the visiting Oakland Athletics a 3-2 victory against the Tampa Bay Rays and a split of their four-game series.

Right-hander Chris Bassitt and three relievers combined to five-hit the Rays, completing a low-scoring series in which the A’s won 2-1 and 3-2 games, sandwiching 4-3 and 2-0 defeats.

Lowrie drew a one-out walk off the Rays’ fourth pitcher, Diego Castillo (0-2), in the ninth. One out later, Chapman, who had homered earlier in the game, lashed his double to right field, sending his teammate home with the go-ahead run.

A’s closer Lou Trivino around a two-out single by Brett Phillips in bottom of the ninth for his fourth save, striking out Kevin Kiermaier on a full count to end it. Jake Diekman (1-0), who worked a hitless eighth, was credited with the win.

The game became a battle of bullpens after the A’s pulled Chris Bassitt after he’d held the Rays to two runs and four hits over six innings. He walked one and struck out nine.

Tampa Bay’s runs off Bassitt came in the first inning on a one-out RBI double by Austin Meadows, scoring Brandon Lowe, who had walked, and in the fifth on a leadoff homer by Lowe, his fourth of the season, tying the game at 2-2.

In between, the A’s scored in the third on a two-out RBI double by Ramon Laureano and a solo homer by Chapman, also his fourth of the season, with two outs in the fourth.

Oakland had a chance to do more damage in the third, but Tony Kemp was thrown out at the plate by Phillips, the Rays’ right fielder, trying to score on a single by Mark Canha.

Canha took second on the throw, from where he raced home on Laureano’s double.

Tampa Bay starter Shane McClanahan was done after four innings, charged with two runs on five hits. He struck out five and did not issue a walk.

With his double and home run, Chapman was the only player in the game with multiple hits, helping Oakland complete a 4-3 trip that began with a 2-1 series win in Baltimore. The A’s return home to host the Orioles on Friday as they continue a run of 20 straight games against the American League East.

Lowe scored both runs for the Rays, who fell to 3-4 on their 10-game homestand that continues with a three-game set against the Houston Astros, starting Friday.