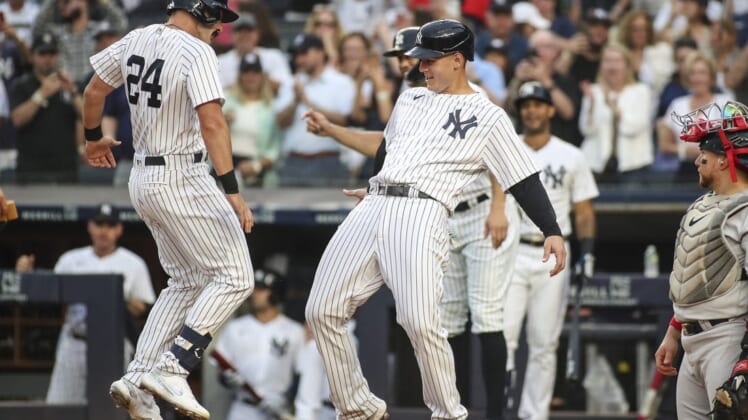 Matt Carpenter hit a three-run homer in the first inning, another three-run shot in the fifth that earned him a curtain call and drove in seven runs as the New York Yankees cruised to a 14-1 rout of the visiting Boston Red Sox on Saturday night.

Carpenter appeared in his 30th game since joining the Yankees on May 26 and in his 72nd at-bat, he slugged a 1-1 curveball into the right field seats from Boston starter Nick Pivetta (8-7) for his 12th homer. After striking out in the third, Carpenter lifted an 0-2 slider from left-hander Darwinzon Hernandez into the first few rows of the right field seats.

It was Carpenter’s third multi-homer game with the Yankees as he also achieved the feat June 12 against the Chicago Cubs and July 2 in Cleveland.

Carpenter came up with the bases loaded in the eighth against Austin Davis and capped a 13-pitch plate appearance with a walk.

Judge hit a solo homer in the fifth when he hammered a 3-2 slider to left field. He then tied Maris by hitting a slider from Kaleb Ort in the sixth off an advertisement in the back of Boston’s bullpen in left field for a two-run homer.

Josh Donaldson hit an RBI groundout, Aaron Hicks was credited with an RBI on a throwing error and Isiah Kiner-Falefa hit a two-run single as the Yankees enjoyed one of their most lopsided wins after losing five of their previous six games.

Rafael Devers homered for the third straight game, but the Red Sox were held to three hits.

After allowing Devers’ 18th career homer against the Yankees and a single to Xander Bogaerts three batters in, New York’s Jameson Taillon (10-2) allowed one run on two hits to go along with five strikeouts in six innings.

After Taillon retired the final 17 hitters, Ryan Weber was credited with his first career save.

Pivetta allowed seven runs and seven hits in 4 1/3 innings as the Red Sox lost for the fifth time in six games and dropped to 12-25 against AL East opponents.