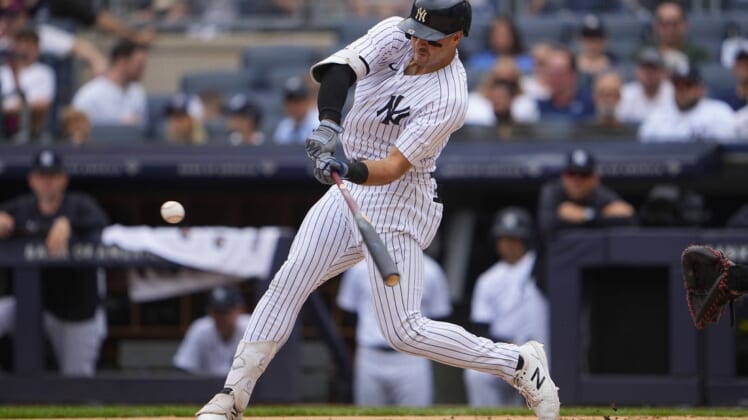 Matt Carpenter homered twice and tied a career-high with seven RBIs as the New York Yankees easily extended their home winning streak to 11 games in an 18-4 rout of the skidding Chicago Cubs on Sunday afternoon at Yankee Stadium.

Carpenter produced a bases-loaded walk in New York’s five-run first off Chicago starter Keegan Thompson (6-2), hit a three-run homer in the second off Daniel Norris and added a two-run drive in the sixth off Alec Mills before finish with an RBI double in the seventh. It was Carpenter’s seventh career multi-homer game and first since connecting twice off Jon Lester on July 20, 2018 at Wrigley Field when he set a career-high with seven RBIs

Isiah Kiner-Falefa and Joey Gallo hit two-run doubles in the first. Giancarlo Stanton had an RBI double in the third and added a two-run single in a five-run seventh.

Kyle Higashioka also homered twice after being inserted into the lineup when catcher Jose Trevino was scratched with a back issue.

Anthony Rizzo also hit an RBI single in the seventh ahead of Stanton’s two-run base hit. Carpenter’s double accounted for New York’s 16th run, Kiner-Falefa’s base hit gave the Yankees their 17th run and
Higashioka hit his second homer in the eighth off first baseman Frank Schwindel’s 35.1 mph curveball.

Ian Happ homered, fell a double shy of the cycle and reached four times for the Cubs, who dropped their sixth straight and fell a season-high 13 games under .500.

Thompson got two outs and was charged with five runs (three earned). He allowed three hits and walked three.

After Happ’s seventh homer gave the Cubs a 1-0 lead, Carpenter tied it when he drew New York’s third straight walk. After Kiner-Falefa’s double, four Cubs converged near home plate on an infield pop-up by Marwin Gonzalez and the ball bounced off third baseman Patrick Wisdom’s glove for an error.