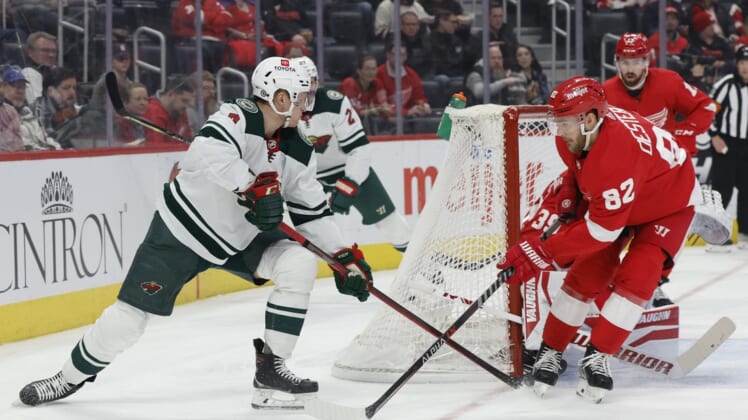 Matt Boldy scored two goals and the visiting Minnesota Wild pulled out a 6-5 shootout victory over the Detroit Red Wings on Thursday.

Mats Zuccarello and Kevin Fiala scored during the shootout for the Wild, who earned a second consecutive win. Zuccarello also had a regulation goal. Joel Eriksson Ek contributed a goal and an assist for Minnesota, Kirill Kaprizov also scored, and Cam Talbot made 29 saves.

Detroit led 3-2 after the first period.

Boldy scored 1:37 into the game after the Red Wings gave away the puck in their zone. He one-timed a shot from the left circle past Nedeljkovic off a Fiala feed.

Vrana tied it when he dug the puck out from along the boards and fired it past Talbot at 6:14.

Nedeljkovic then gifted the Wild a goal at 12:07. On a power play, Eriksson Ek shoveled the puck into the Detroit zone and Nedeljkovic swiped at it with his puck. Instead of controlling it, the puck trickled in between his legs.

Raymond knotted the score with a blast from the left circle at 14:09 off a Leddy feed. Nedeljkovic was credited with his first assist of the season.

Vrana’s second goal came on a power play at 18:31. He lifted a shot from the side of the net into the top shelf.

Raymond made it 4-2 at 5:52 of the second period with a shot in front off a Leddy pass.

Zuccarello scored on a power play midway through the period after his shot deflected off a defenseman’s stick.

Boldy tied it 4-all at 3:04 of the third period, scoring from the slot off a Frederick Gaudreau pass.

Kaprizov scored off his own rebound at 12:13 to give the Wild a 5-4 lead. Matt Dumba and Eriksson Ek had the assists.

Oesterle ripped a shot from the right circle past Talbot with 2:51 remaining in regulation to tie it once again. Filip Zadina and Veleno had the assists.