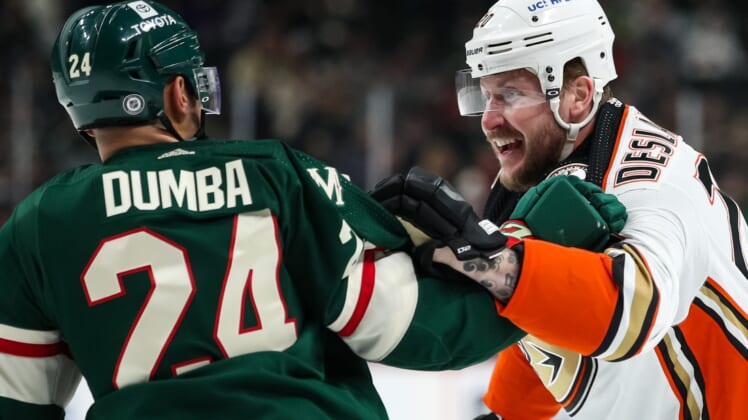 Mats Zuccarello finished with two goals and one assist Friday as the Minnesota Wild routed the Anaheim Ducks 7-3 in Saint Paul, Minn.

Matt Boldy and Ryan Hartman each had a goal and an assist; Victor Rask, Matt Dumba and Kevin Fiala also scored; and Kirill Kaprizov had two assists for the Wild. Minnesota’s Kaapo Kahkonen made 39 saves to win his third consecutive start.

Max Comtois and Trevor Zegras logged a goal and an assist apiece for Anaheim, and Derek Grant also found the net.

Ducks goalie Anthony Stolarz was lifted 2:05 into the third period, having allowed three goals in that period and six on 29 shots overall. Lukas Dostal replaced him and stopped 12 of the 13 shots he faced.

The Ducks lost for the third time in four games while the Wild earned their third consecutive victory.

The Wild set the tone by scoring the game’s first two goals in a span of 1:27. Fiala’s eighth of the season, off a Boldy assist, put Minnesota on top at 7:25 of the opening period, and Hartman doubled the lead shortly thereafter with his 16th.

Comtois got the Ducks on the board at 11:39 of the first with his second, but Zuccarello responded at 14:59.

After a scoreless second period, Minnesota made sure the outcome wasn’t in doubt by chasing Stolarz early in the third. Boldy’s second goal, 30 seconds in, was followed by Zuccarello’s 11th just four seconds later and then Rask’s fifth at 2:05.

Grant (fourth) and Zegras (10th) replied for the Ducks in the next four minutes. Dumba’s fourth capped the scoring at 11:47.

Anaheim concludes its two-game road trip Saturday at Chicago. Minnesota gets the weekend off before visiting the Colorado Avalanche on Monday.