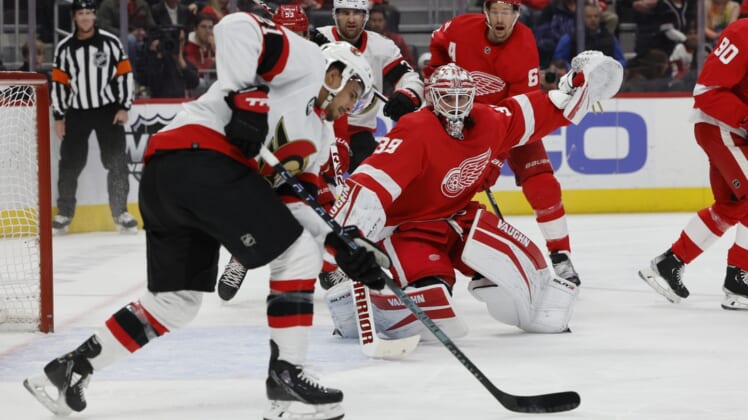 Mathieu Joseph scored his first career hat trick and also had an assist to lead the Ottawa Senators to a 5-2 victory over the host Detroit Red Wings on Friday night.

Josh Norris and Austin Watson also scored goals and Mads Sogaard finished with 27 saves in his NHL debut for Ottawa, which snapped a two-game losing streak. The 6-foot-7, 196-pound Sogaard, a second-round pick in 2019, became the 17th player from Denmark to play in the NHL and just the second goaltender, joining Frederik Andersen of the Carolina Hurricanes.

Ottawa took a 1-0 lead at the 5:07 mark of the first period on Watson’s fourth goal of the season. Joseph set up the shorthanded score with a pass from the right boards to Watson in the high slot. Watson then fired a shot through the legs of Oscar Sundqvist and into the top right corner.

The Senators scored again just a minute later when Alex Formenton knocked in a rebound of a Colin White shot. However, Detroit challenged for goalie interference and replays showed that Formenton had shoved defenseman Moritz Seider into Nedeljkovic on the edge of the crease shortly before scoring and the goal was disallowed.

The Red Wings tied it, 1-1, early in the second period on Raymond’s 21st goal of the season. Raymond and Jake Walman emerged on a two-on-one break and Walman’s slap shot from above the left circle handcuffed Sogaard. The puck trickled through Sogaard’s pads and into the crease where a charging Raymond tapped it into an open net.

Norris then put Ottawa back ahead at the 2:25 mark of the third period with a power-play goal, blasting a shot from the right circle past Nedeljkovic’s blocker and inside the far post for his 27th goal of the season.

Joseph made it 3-1 just 71 seconds later, knocking in a loose puck from the slot. He then increased the lead to 4-1 with 6:49 left when he faked a pass from the right circle on an odd-man rush and fired a wrist shot short-side past Nedeljkovic’s glove.

Detroit pulled Nedeljkovic for an extra attacker with 6:15 left and Raymond scored just 14 seconds later on a deflection. Joseph sealed the win with an empty-netter with 3:55 to go, his 11th goal of the season.