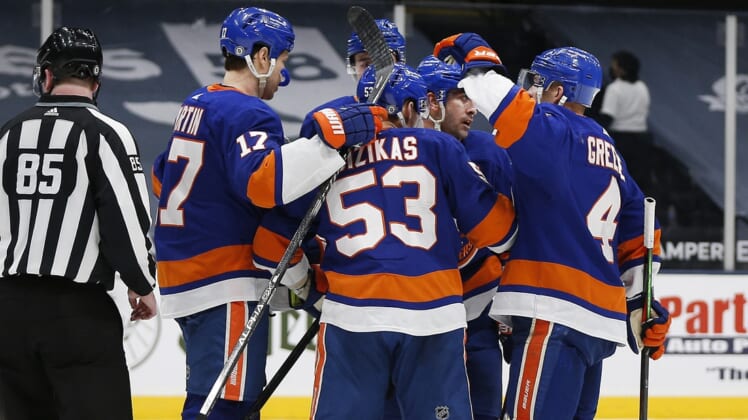 Mathew Barzal had three goals and two assists while teammate Jordan Eberle added two goals and an assist as the New York Islanders defeated the Washington Capitals 8-4 on Thursday in Uniondale, N.Y.

Barzal completed his third career hat trick by batting a puck out of the air and in with just over a minute left.

Josh Bailey contributed a goal and two assists for New York, which also got goals from Brock Nelson and Casey Cizikas. Semyon Varlamov made 18 saves in the win.

John Carlson led the Capitals with two goals. Daniel Sprong contributed a goal and an assist, and T.J. Oshie also scored for Washington.

New York fell behind 61 seconds into the game before scoring three in a row during a four-goal first period. Washington also allowed four goals in the third period of a 5-2 road loss to the New York Rangers on Tuesday.

The Islanders improved to 14-1-2 at home this season and snapped a two-game losing streak. They also tied the Capitals for first place in East Division.

Barzal scored twice in an opening period that saw the Capitals need to use two goalies. Starter Ilya Samsonov was accidentally knocked down by teammate Oshie and came out only 30 seconds into the game.

However, Samsonov returned and replaced Vitek Vanecek with just over three minutes remaining in the period after the latter gave up two goals on nine shots. Still, the Islanders repeatedly capitalized on Washington’s defensive miscues — turnovers and failures to clear the puck — to pressure the visitors.

Carlson gave the visitors a 1-0 lead by scoring on a blast at the 1:01 mark of the game.

Eberle tied it four minutes later before Barzal scored an unassisted goal on an end-to-end rush. That came with just under four minutes left in the opening period, and New York never trailed again.

Nelson and Barzal scored for the Islanders around a Sprong goal for the Caps, and New York held a 4-2 lead after one.

The Capitals tried to stay close but could not. Cizikas made it 5-2 early in the second period before Oshie notched a power-play goal. Eberle scored his second goal but Carlson did the same in the final minute of the period, cutting the deficit to 6-4.

Samsonov wound up with 18 saves.