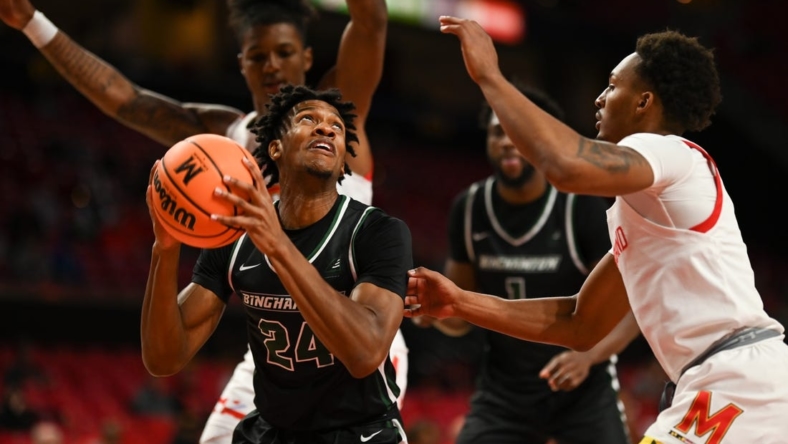 Hakim Hart scored all 13 of his points in the first half and added eight rebounds. Donta Scott contributed 10 points and nine boards as Maryland (3-0) bolted to an early lead and remained in control.

Employing full-court pressure from the opening tip, the Terrapins overwhelmed the Bearcats, forcing six turnovers in the first 4 1/2 minutes.

The defense fueled the offense, producing open-court chances. Maryland cashed in, making five of its first six shots and outscoring Binghamton in the paint 32-4 in the first half. Overall, the Terrapins had 19 fastbreak points to none for the Bearcats.

Binghamton (2-1) was paced by John McGriff, who tallied 12 points. Playing minutes from his hometown, McGriff scored 10 of the Bearcats’ first 12 points to keep the score respectable.

Maryland swarmed Binghamton’s top threat, Jacob Falko, holding him scoreless and to just one shot. Binghamton made just 4 of 21 (19 percent) from beyond the arc and finished at 34.4 percent overall.

Reese and Young had two buckets each as the Terrapins surged to an 8-0 lead. When Ian Martinez dropped a short turnaround jumper to put Maryland in front 16-4, all eight of the Terrapins’ baskets had come from the paint.

Moments later, a 15-2 Maryland run, ignited by a 3-pointer from Noah Batchelor, put the Terps in command 31-8.

Maryland cleared the bench so early that sophomore Ike Cornish, who entered the game with four career points, scored consecutive baskets before the game was 18 minutes old, giving the Terrapins their biggest lead of the half, 37-12.

Binghamton never made a serious run after the break. Maryland’s lead reached 32 points late in the game when Cornish drained a 3-pointer. He finished with nine points in 13 minutes.

The Terrapins’ dominance was such that it mattered little that they made only 4 of 20 shots from beyond the arc. Overall, Maryland made 48.4 percent of its field-goal attempts.