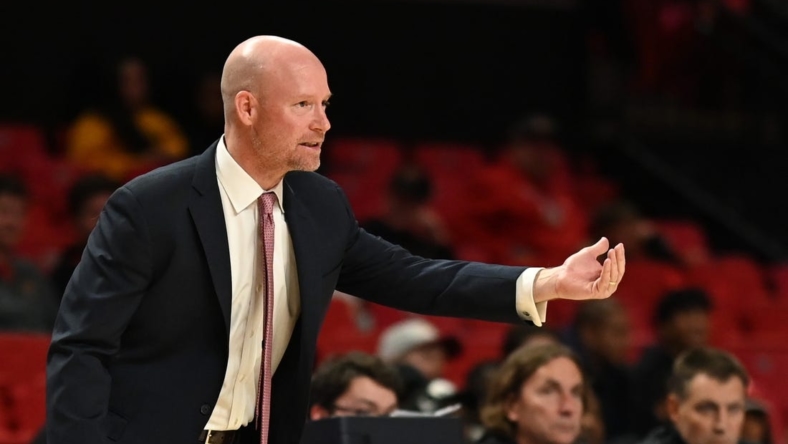 Donta Scott matched his career high with 25 points and Hakim Hart tallied all 16 of his points in the first half as Maryland overwhelmed Saint Louis 95-67 on Saturday in the Hall of Fame Tip-Off in Uncasville, Conn.

Donald Carey, a transfer from Georgetown, contributed 16 points, his Maryland high, as he hit four 3-pointers in the first half when the Terps sprinted to a 24-point lead. Ian Martinez added 14 points off the bench on 6-of-8 shooting.

After thumping three overmatched foes, it was the first big win for the Terrapins (4-0) under new coach Kevin Willard. Maryland did it with Willard’s signature defensive pressure, which forced 14 turnovers and limited Saint Louis to 36.2 percent shooting.

The Terps’ up-tempo offense produced high-quality shots. Maryland made 32 of 63 attempts (50.8 percent), with 18 field goals coming from the paint.

The Terps led all the way in advancing to Sunday’s championship game against Providence or Miami (Fla.).

The Terps completely dominated the first half, hitting 19 of 37 shots (51.7 percent) while holding Saint Louis to 8 of 25 (25 percent). Maryland had just three turnovers while its defense forced eight and blocked four shots.

Consecutive 3-pointers by Hart and Carey put the Terps up 10-2 in the opening minutes.

Then Maryland took control midway through the first half, going on a 16-2 sprint. Carey triggered the run with a 3-pointer.

Then the spree came to a crescendo when Julian Reese made a deft backdoor pass to Hart for a layup, then blocked a shot at the other end which helped produce a fast-break 3 from Jahmir Young (11 points).

When Hart hustled to save a loose ball from going out of bounds, he directed it to Martinez for a layup and a 38-19 lead.

After Scott and Carey made 3-pointers 23 seconds apart in the final minute of the half to expand the Terps’ bulge to 51-27, frustration boiled over for the Billikens.

When two Saint Louis players drew contact with unsuccessful layup attempts and failed to get a whistle, coach Travis Ford sprinted from the other end of the floor to confront an official before he was restrained by Collins.

Ford was charged with a technical foul and at the start of the second half, Young made both free throws for a 53-27 lead.

After the break, Saint Louis never got the deficit inside 19 points. When Martinez drained a 3-pointer with 3:21 left, it stretched the Terps’ lead to their biggest of the game at 91-59.