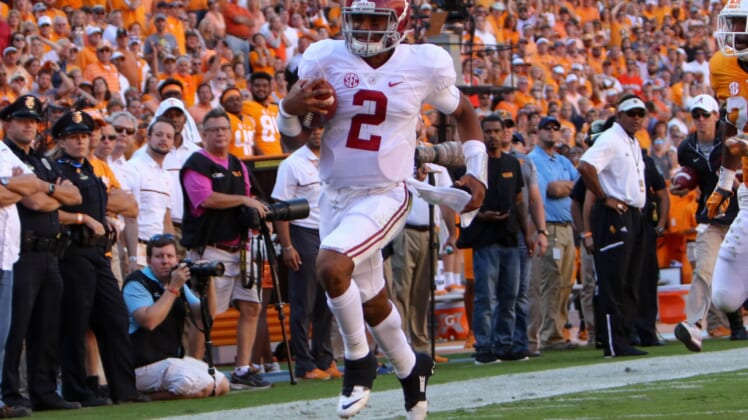 Decision day is approaching for Jalen Hurts, and the odds suggest the Alabama quarterback will be following a former coach to his new program.

Barrett Sallee of CBS Sports shared the most recent release from Bet Online, showing Maryland as the most likely landing spot for Hurts.

Odds on Jalen Hurts’ next team via @betonline_ag

Maryland hired Mike Locksley, who served as the Alabama offensive coordinator in 2018, the co-OC in 2017 and an offensive analyst the year before.

And the Terps need a quarterback badly.

Last season, they mustered a 5-7 record while dealing with subpar play behind center. Maryland ranked 88th nationally at 7.0 yards per pass attempt, and only three non-option-based offenses threw for fewer yards.

Hurts would be an enormous upgrade for the Terps, and he’d give Locksley a quality one-year starter after transferring.

Not coincidentally, Miami holds the second-best odds. The ‘Canes hired Dan Enos, who was Hurts’ position coach in 2018. Interestingly, Oklahoma has been linked to Hurts but isn’t included in the top five.

Considering the Locksley connection and current roster, though, there isn’t a more comfortable landing spot for Hurts than Maryland.