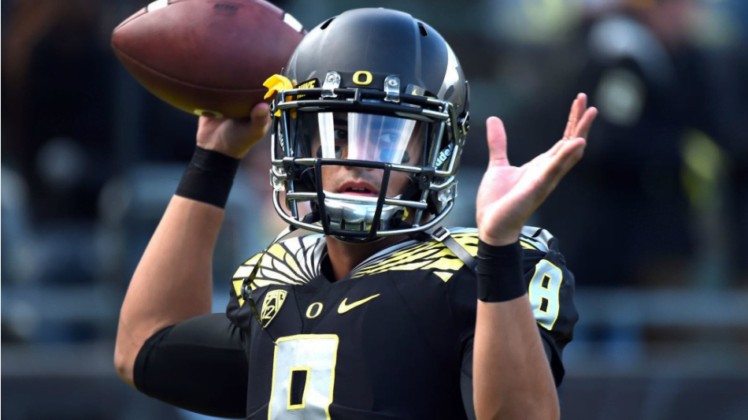 Numbers are not infallible, but they sure do explain a lot of things.

In 2014, I began to experiment with some data to help suggest which quarterbacks might have the most natural transitions to the NFL. I took into account four statistics that all took into account the translatability of a quarterback to a more physical, more nuanced level of competition: touchdown percentage, interception percentage, third down conversion percentage, and density (weight divided by height in inches). While scouting players solely based on statistics, or “box score scouting,” is certainly never the entire story, it can provide an informed snapshot of how a player has generally performed over a given period of time. This is especially true for quarterbacks who, for the most part, should be fairly dominant on a collegiate level if they hope to successfully segue to the NFL.

The statistic I created, the Translation Rating, was ((TD%-INT%)+3rd down %)*density. It spat out a fairly spot on top five that included Cam Newton, Russell Wilson, Andrew Luck, and Teddy Bridgewater. Blake Bortles and Derek Carr were closer to the middle of the pack, while the likes of future rejects Jake Locker and Blaine Gabbert sunk to the bottom. At the time, it seemed to be a decent barometer of how the young quarterbacks of the past few years could shake out, especially given the success that Bridgewater had over his first year in Minnesota.

However, over the past few weeks, I began to experiment a bit more to figure out how to create an even better, more actionable metric that helped to cut a bit more of the dead weight from my numbers. Eventually, I realized that it was not a new metric that I needed to create; I just needed better filters to help cut out some of the dead weight and ensure that the cream rises to the top.

After analyzing three years of quarterback data, I was able to make cutoffs for TD%-INT%, 3rd down %, density, and also yards per sack taken. I realized that yards per sack taken is often on the quarterback for panicking in the face of pocket pressure, and figured that it should factor into my analysis. For the cutoffs, I essentially took the last few years of quarterback data and split the metrics into quartiles. Any prospects on my list that fell into one of the bottom quartiles was knocked.

The results that I found were pretty interesting, and definitely can help to inform quarterback selections in the future. Most importantly, it may provide a sense of the statistical divide between the two quarterbacks who are considered to be at the head of this class: Jameis Winston and Marcus Mariota. One of them seems like a safe bet while the other could be a potentially dangerous gamble for a team.

(In each column, players are sorted by Translation Rating, although this is not one of the four factors.)

Note: Click on the tables to expand and read them

THE CREAM OF THE CROP – PASSED 4/4 FACTORS

As can be seen here, the list is made up of six 2014 starting NFL quarterbacks and Mariota, who has often been harangued for playing in a gimmicky offense and not being “assertive enough” as a leader. This top group of quarterbacks  pass every single factor, and even though a couple of them have not turned out quite as well as expected – specifically Geno Smith – this seems like a fairly safe group in terms of finding a potential player at the quarterback position. One should feel comfortable drafting a quarterback who scores this well in the first or – if they slip – early second round of the NFL Draft.

It should also be noted that Mariota has a higher TD%-INT%, third down percentage, and a lower yards per sack total than either Smith or Dalton. His 2013 numbers would have placed him in the group below this one. However, he has improved in terms of his pocket sense and awareness in 2014, and these numbers would seem to bear that contention out.

This is a little bit more of a muddled group, so it makes sense to break it down a bit more in terms of where many of these players faltered.

Kellen Moore’s lack of size is always going to be a preventative factor for him making it at the next level, especially since he may not be able to take the hits that other players can on a regular basis. Other, more mercurial players such as Colin Kaepernick, Ryan Mallett, and soon to be rookies Blake Sims and Brett Hundley found themselves here due to high interception rates, showing a lack of nuance in terms of making reads at the next level.

Garrett Grayson and Bryce Petty, on the other hand had issues dealing with pocket presence and pressure. Petty did not make the cut in terms of his third down conversion rating, while Grayson had a very high yards per sack given up number. These players should probably be lumped in with the Kaepernicks and Derek Carrs of the world rather than the middling backups.

In the end, while none of these players are sure things, some of them have turned out to be decent NFL players. Kaepernick led his 49ers to a Super Bowl appearance, while Carr, RGIII, and Mallett have flashed upside at times. This group has around a 31% hit rate at producing successful, “starter level” quarterbacks, while probably means that one of Hundley, Grayson, Petty, or Sims is going to end up as a starter within the next three years. My guess, at this point, is Hundley, although Grayson could also be an intriguing prospect in the third round or so.

These are the players that, by and large, were quite a bit rawer coming out of college and needed a lot more work than their predecessors. While one of these players has become a successful NFL starter (Tannehill) and another couple flash some sort of potential (Osweiler and Thomas), there is also an extremely high bust rate in this group. These are the player who also, it could be construed, were less successful in college than their peers, as all of them have extremely low TD%-INT% numbers.

Tannehill may be a bit of an exception to this group, as well. He had just moved from WR to QB the year he was drafted, and had never really gotten his footing at the position. He also got to continue his development with the offensive coordinator he was under in college, Mike Sherman. Even then, it probably took Tannehill at least three full seasons of development before he became a feasible starting quarterback in the NFL.

Christian Ponder was a game manager at best at Florida State, and he did not flash enough ability to make NFL throws. Nassib and the already-mentioned Osweiler and Thomas were extremely raw prospects. Manuel was drafted because the Bills’ GM at the time, Buddy Nix, thought he could be the next Cam Newton. He was wrong.

This is a group of high upside guys that did not have the numbers to warrant their praise and lofty draft statuses. If more players hit from this region in the future, this could serve as an impetus to fix the filter and make it slightly more effective. For now, though, buyer beware with these seven quarterbacks.

This is the tier where dreams come to die.

Now, this is another area where there is definitely still a lot of potential that is percolating. Johnny Football has only played in a couple of games, and he could still end up figuring out his potential and becoming a great player. Blake Bortles had his ups and downs as a rookie, but NFL types seem to like the recent hire of Greg Olsen as a stepping stone in his development. Mike Glennon and Nick Foles were decent two years ago. Jake Locker was once a fantasy sleeper. Mettenberger has had his moments, although he has yet to win an NFL game.

This is the tier where flaws are highlighted. Jameis had an interception percentage of 3.85% this past year – that’s second highest of any interception percentage in our sample outside of Matt Barkley (3.88%). Jameis also lost 8.13 yards per sack; not awful, but not where he needs to be in order to translate effectively per this particular study.

Something happened in 2014 Jameis. It might have had to do with the loss of Kelvin Benjamin, or perhaps a change in preparation or scheme. But Jameis regressed badly in 2014 as opposed to his 2013 numbers.

Do you need more proof of this? Consider where Jameis would have been ranked had he been able to declare for last year’s draft.

Now, personally, I’m not going to rank Jameis as low as my filter would have him ranked. After all, the upside is clearly there, and the numbers bear that out. However, to me, the biggest difference between Jameis and Mariota is that, year over year, Jameis regressed and Mariota improved. Jameis gets a late 1/early 2 grade. Give me Mariota first.

At least everyone should be able to laugh at this group. All of these quarterbacks are just bad. Sean Mannion should not be touched. Aaron Murray has some major questions he needs to overcome. Austin Davis and Matt McGloin? If your team starting those quarterbacks, I hope you’re already hitting the draft sites hard.

I kind of feel bad for Stephen Morris though. Poor guy.

Overall, numbers are not everything. That being said, to just throw away the statistics is unwise, as there is precedent for them helping to clarify conversations between differing quarterbacks. Jameis Winston can certainly be the best quarterback in this class down the road. However, from a statistical standpoint, Marcus Mariota would be the lower risk buy in this draft. He has shown more maturation from year to year, throws less interceptions, converts third downs at a higher rate, and gives up less yards per sack.

Now, all that matters is if the tape bears out those statistical observations. I happen to think that it does. Others assuredly disagree. We shall see what happens over the next few months…and years, for that matter.