Tennis legend Martina Navratilova announced on Monday that she has been diagnosed with both throat and breast cancer.

The 66-year-old revealed in a statement released Monday that she is battling stage one throat and breast cancer. She expects to begin treatment later this month, with the latest prognosis from doctors offering a positive outlook.

In a statement posted on the Women’s Tennis Association (WTA) website, Navratilova expressed optimism for her battle against both cancers.

“This double whammy is serious but still fixable, and I’m hoping for a favorable outcome. It’s going to stink for a while, but I’ll fight with all have I got.”

Born in Czechoslovakia, she ascended the tennis rankings to become the No. 1 women’s tennis player in the world. During her iconic career, she won 59 Grand Slam titles across singles, doubles and mixed doubles.

Navratilova previously revealed in 2010 that she received a breast cancer diagnosis during a routine mammogram. She had the tumor removed and later underwent radiation therapy.

Mary Greenham, Navratilova’s agent, told CNN that the tennis legend found an enlarged lymph node on her neck during the WTA Finals. After undergoing a biopsy, it was determined she had stage one throat cancer and further tests found cancer in her breast. 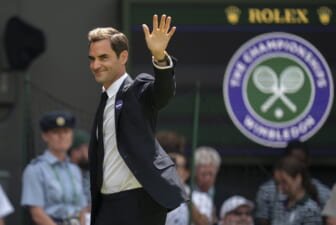 Also Read:
Tennis icon Roger Federer announces retirement plans: ‘This is a bittersweet decision because I will miss everything’

Inducted into the International Tennis Hall of Fame in 2000, she has since worked as a TV analyst and she is an integral member of the Women’s Sports Policy Working Group. She will undergo a majority of her treatments in New York City.