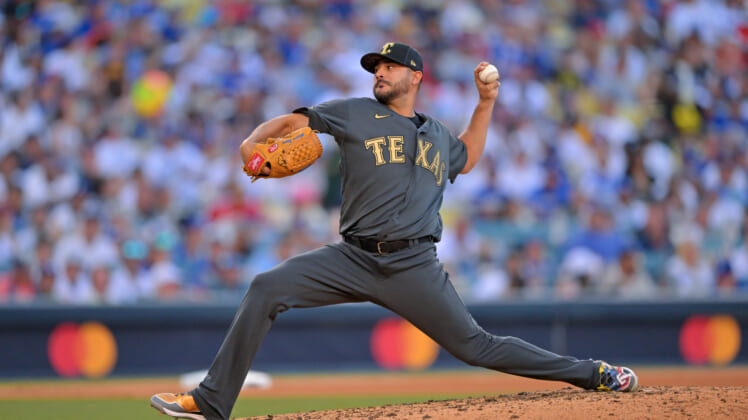 Signed to a mere one-year, $4 million contract back March, Texas Rangers starter Martin Perez is among the best bargains in baseball.

The 31-year-old starter just made his first All-Star appearance and has headed an otherwise mediocre rotation in Arlington.

With Texas bordering on irrelevance in the American League Playoff race (7.5 games out of final wild card spot), there’s a good chance it will flip Perez for assets.

Despite the two sides wanting to work out an extension, nothing seems innevitable on this front ahead of the Aug. 3 MLB trade deadline. Below, we look at three ideal Martin Perez trade scenarios.

Minnesota currently finds itself at 50-44 and two games ahead of the Cleveland Guardians in the AL Central. It is also just three games in front of the third-place Chicago White Sox. Adding to a questionable group of starting pitchers has to be the focal point for the Twins’ front office.

Texas’ return in this hypothetical trade includes Minnesota’s No. 11 prospect in pitcher Ronny Henriquez and fellow hurler Drew Strotman (13th). It’s a nice haul from a farm system that ranks in the bottom half of MLB.

Both are currently pitching in Triple-A and could make an impact in Arlington before the season is over. In particular, Henriquez seems to have great stuff. He’s struck out 61 batters in 56.2 innings.

Toronto’s major pick up during last season’s MLB trade deadline, Jose Berrios, has been an utter disaster in 2022. He’s pitching to an ugly 5.22 ERA with an inflated 1.36 WHIP in 19 starts. In fact, he’s pretty much been a weak link in a rotation that has seen Alek Manoah, Kevin Gausman and Ross Stripling perform at high levels.

With Hyun-jin Ryu out for the season due to an elbow injury, the Jays must make a move if they are going to compete for second-place in the AL East with the Tampa Bay Rays. It’s that simple. This is also where Perez could come into play. Throughout his career, Perez has posted a 2.65 ERA in Toronto.

Toronto’s farm system ranks in the bottom 11 of the league, per MLB.com. It will have to offer up a top prospect to pry the cheap Perez away from Texas.

Coming in at No. 7, Robberse would make sense for the Rangers. He’s currently pitching at high Single-A Vancouver and performing at darn good level (3.08 ERA, 1.16 WHIP). Though, Hernandez would be the true wild card here. Currently in Triple-A, the reliever has posted a 1.88 ERA and 0.88 WHIP while striking out 34 batters in 24 innings. He has closer written all over him.

Related: How a Juan Soto trade to the New York Yankees could work

New York has been reluctant to part with either of its top-two prospects (Anthony Volpe and Oswald Peraza) in trade talks with the Cincinnati Reds for ace Luis Castillo. It’s led to speculation that Brian Cashman and Co. might look to pull off a lower-level move ahead of the MLB trade deadline.

Despite New York’s MLB-best 64-28 record, something needs to happen on this front within the next couple weeks. That’s especially true with the oft-injured Luis Severino sidelined again. Adding Perez to the mix would round out a rotation that has Gerrit Cole, Jordan Montgomery, Jameson Taillon and the surprising Nestor Cortes pitching at high levels.

Notice the inclusion of Garcia here? New York remains in the market for an outfielder and is now out on multiple unvaccinated Royals players. Garcia would be a dramatic upgrade over both Joey Gallo and Marwin Gonzalez in the outfield.

In return, Texas nabs one of the Yankees’ top-five prospects in Ken Waldichuk. The 24-year-old hurler has a chance to be special at the next level. The lefty dominated Double-A competition for Somerset before getting called up to Triple-A — pitching to a 4-0 record with a 1.26 ERA and 0.91 WHIP while striking out 46 batters in 28.2 innings. He could join the rotation immediately.

Already boasting a solid farm system, Texas also adds depth in the form of 21-year-old outfielder Pereira and a potential bottom of the rotation arm/long reliever in Deivi García.