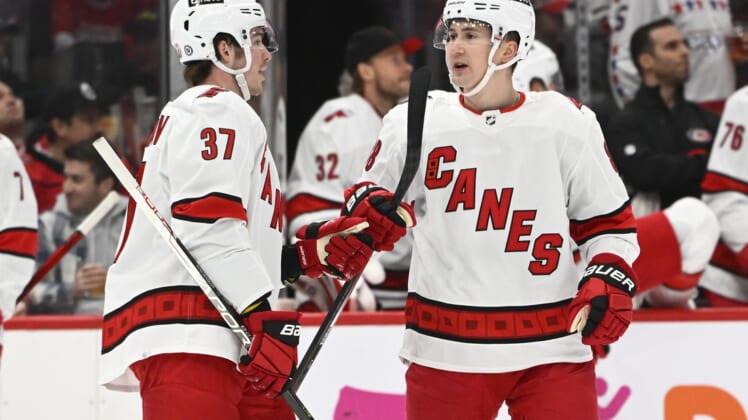 Martin Necas collected two goals and an assist to fuel the visiting Carolina Hurricanes to a convincing 6-1 victory over the Washington Capitals on Monday.

Brady Skjei had a goal and an assist and fellow defenseman Brett Pesce joined Derek Stepan and Sebastian Aho in scoring a goal as the Hurricanes improved to 3-0-1 in their past four games.

Max Domi, Teuvo Teravainen and Vincent Trocheck each notched two assists and Frederik Andersen made 25 saves to help Carolina defeat Washington for the first time in four meetings this season.

Tom Wilson scored for the Capitals. Washington goalie Vitek Vanecek yielded five goals on 23 shots in two periods before being relieved by Ilya Samsonov to start the third. Samsonov stopped five of the six shots he faced.

In the first period, Carolina’s Jesperi Kotkaniemi fanned on his shot attempt from the right circle, but the puck skidded to Stepan for an easy conversion to open the scoring at 2:41. The goal was Stepan’s eighth of the season and first since Feb. 7.

Carolina doubled the advantage just over five minutes later after Trocheck alertly fed an open Necas on the doorstep.

Washington superstar Alex Ovechkin nearly halved the deficit with a blast from the left circle at 14:38 of the first period. Ovechkin’s apparent goal was negated, however, after officials whistled T.J. Oshie for a two-minute slashing penalty.

Wilson scored from in close to put the Capitals on the scoreboard at 6:47 of the second period before the Hurricanes tallied three times in just over a seven-minute stretch to take a commanding 5-1 lead.

With his team short-handed, Aho gained inside position on Washington’s Marcus Johansson before tucking the puck past Vanecek at 8:35. Aho’s team-leading 29th goal extended his point streak to four games.

Pesce converted a feed from Teravainen at 10:38 for his seventh goal of the season before Necas scored from the slot at 15:39. Necas’ fourth goal in four games pushed his season total to 13.

Necas set up Skjei’s goal at 9:57 of the third period to cap the scoring.