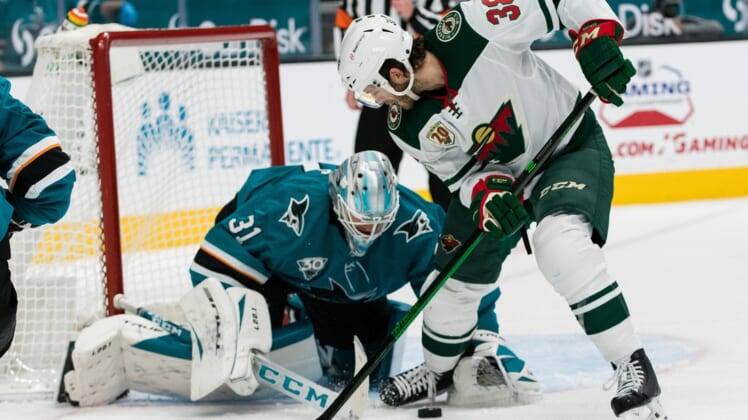 Martin Jones made 26 saves to help the San Jose Sharks complete a two-game sweep of the visiting Minnesota Wild with a 4-2 win on Wednesday night.

Jones made 22 saves in a 4-3 shootout win against the Wild on Monday.

Nikolai Knyzhov scored his first NHL goal in his 38th game, and Rudolfs Balcers, Ryan Donato and Evander Kane also scored for San Jose, which pulled within four points of fourth place in the West Division.

Kirill Kaprizov and Mats Zuccarello scored and Kaapo Kahkonen made 29 saves for the Wild, who have won a franchise-record 11 straight home games but are 0-4-1 in their past five road games with one road win since Feb. 24.

After both goalies made 10 saves in a scoreless first period, the Sharks scored twice in the second period to take a 2-0 lead.

Balcers gave the Sharks a 1-0 lead at 4:41 with his fourth goal of the season.

It began when Brent Burns made a long stretch pass to Tomas Hertl coming across the Minnesota blue line. Hertl fed a soft pass to Balcers coming through the slot, and he lifted the puck high into the net.

Burns and Hertl each had two assists overall.

Kevin Fiala was in the penalty box for slashing Erik Karlsson when Burns took a shot from just inside the blue line. Kahkonen made the save, but the rebound came out to Donato, who backhanded the puck through the goalie’s pads for just the second power-play goal in eight games for San Jose.

Kaprizov scored his team-leading 12th goal of the season to cut the deficit to 2-1 at 8:23 of the third period.

Knyzhov re-established the two-goal lead when he scored from the left circle to make it 3-1 at 10:58.

After Zuccarello scored with Kahkonen pulled for the extra skater with 13 seconds left to make it 3-2, Kane scored into the empty net with one second left.