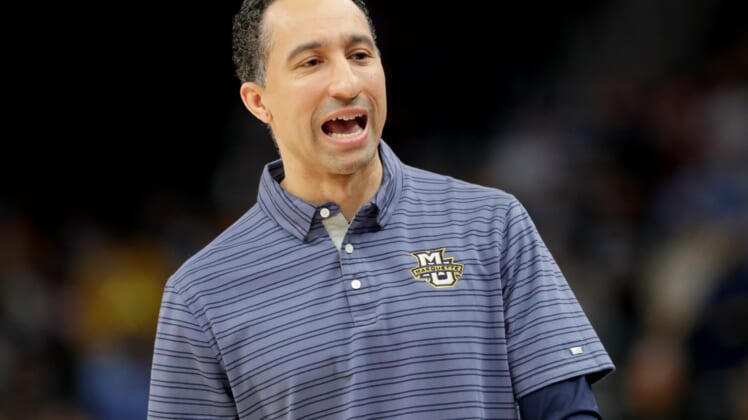 Marquette head coach Shaka Smart is shown during the second half of their game against Creighton Saturday, January 1, 2022 at Fiserv Forum in Milwaukee, Wis.Mumen02 11

Greg Elliott scored a career-high 25 points as Marquette took down visiting DePaul 87-76 on Tuesday night in Milwaukee to extend its win streak to three games.

Elliott provided a spark off the bench, with 7-for-11 shooting from the field and a perfect 7-for-7 from the charity stripe. Darryl Morsell added 16 points, and Oso Ighodaro had 11. Tyler Kolek chipped in five and distributed the ball with ease, finishing with a career-high 10 assists.

Javon Freeman-Liberty paced the Blue Demons (9-6, 0-5) with 24 points on 9-of-20 shooting to go along with 10 rebounds. Yor Anei added 16 points and 11 rebounds to record his first double-double this season, and David Jones collected nine points.

After starting 9-1, DePaul has now lost its last five games, all of which have been against conference opponents.

A 22-7 run that started just over a minute into the second half allowed Marquette to pull away and extend its lead to 12. Morsell had seven points and Kam Jones hit a pair of 3-pointers during the surge, and the Golden Eagles never looked back.

The Blue Demons would trail by double digits for the remainder of the game and shot 42.4 percent following halftime.

In what was an extremely high-scoring first half, both teams shot over 46 percent from 3-point range. Marquette went into the break with a narrow 44-43 lead thanks to 15 points from Elliott and nine from Lewis.

Freeman-Liberty had 13 points of his own to keep DePaul close, and Jones added seven. The Blue Demons were dominant on the glass, jumping out to a 23-12 advantage in the rebounding battle.

The Golden Eagles were extremely efficient offensively through the first 10 minutes of action, shooting 10-of-15 to jump out to an early 22-17 lead. They scored 14 of those points in the paint.