After falling behind Jonathan Taylor and Nyheim Hines on the depth chart, running back Marlon Mack wants to be dealt from the Indianapolis Colts.

It was reported following Indianapolis’ Week 3 loss to the Tennessee Titans that the two sides have agreed to pursue a trade for the former fourth-round pick from South Florida.

Mack, 25, has appeared in just one game this season — tallying 16 yards on five attempts. However, he’s seemingly fully healthy after missing all but one game of the 2020 campaign due to a torn Achilles.

Back in 2019, the still-young back registered 1,091 rushing yards and eight touchdowns at a clip of 4.4 yards per rush. That represented the second consecutive year he put up north of 1,000 total yards. With a number of teams struggling to get it going on the ground, there’s going to be interested in Marlon Mack. It’s in this that we look at three ideal trade scenarios for the underrated back.

Miami ranks in the bottom 10 of the NFL in rushing yards through three weeks. While it is averaging a decent 4.0 yards per attempt, there’s really nothing to write home about on this front. Myles Gaskin is the Dolphins’ leading rusher with 139 yards. Off-season acquisition Malcolm Brown has put up just 68 yards on the ground.

If the Dolphins (1-2) are to even have a chance of getting back into the AFC Playoff race with Tua Tagovailoa sidelined to injury, they’ll need a more robust rushing attack. Mack would obviously be a nice low-cost option.

Absolutely brutal. After watching both Leonard Fournette and Ronald Jones step up in the playoffs last season, the defending champs have gotten nothing of substance from this duo. During a Week 3 loss to the Los Angeles Rams, these Buccaneers tallied 35 rushing yards.

It’s a number that just won’t cut it. Even with seven-time Super Bowl champion Tom Brady playing tremendous football, he’s going to need more balance on offense. After all, the 44-year-old quarterback leads the league in both completions (97) and attempts (141). Is that sustainable?

How bad are the injury issues for San Francisco at running back? They featured fullback Kyle Juszczyk a whole heck of a lot in the backfield in last week’s loss to the Green Bay Packers. In fact, Kyle Shanahan utilized rookie backup quarterback Trey Lance in a goal-to-go situation rather than employing a running back.

There’s a good reason for this. Star back Raheem Mostert (knee) is out for the season. After putting up a tremendous debut Week 1, rookie Elijah Mitchell is currently sidelined. Meanwhile, Jeff Wilson remains out after suffering an injury during the offseason and rookie second-round pick Trey Sermon has not been impressive. San Francisco fancies itself as a title contender. But without balance behind a limited Jimmy Garoppolo, that’s just a pipe dream. 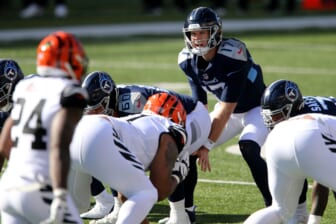