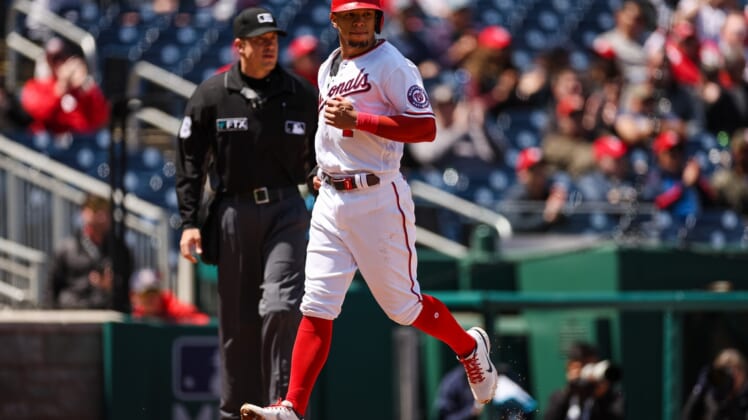 The Nationals have lost eight straight games, their longest skid since 2009.

Trevor Rogers (1-3) earned his first victory of the season, allowing just two hits, two walks and one run in six innings. He struck out four.

Cole Sulser got the final four outs for his first save with Miami.

Josh Bell and Cesar Hernandez each had an RBI double for the Nats.

Washington opened the scoring in the first. Leadoff batter Hernandez hit a first-pitch fastball for a soft-fly single to center. He advanced to second on a wild pitch and to third on a passed ball before scoring on Bell’s opposite-field double down the line in right.

Miami tied the score 1-1 in the third as Miguel Rojas reached on shortstop Lucius Fox’s throwing error and scored on Jon Berti’s double to left-center.

Miami surged ahead in the seventh.

Brian Anderson doubled and Rojas was hit by a pitch to set up the inning. That’s when Sanchez pinch hit for Bryan De La Cruz, pouncing on a low 0-1 slider from reliever Victor Arano, hitting it past a diving Bell at first base. One out later, Arano’s wild pitch allowed Rojas to score, giving Miami a 3-1 lead.

Washington closed its deficit to 3-2 in the eighth.

With two outs and no one on against reliever Richard Bleier, Victor Robles doubled. Two pitches later, Hernandez doubled off the wall in left in what was nearly a tying homer. Bleier then walked Juan Soto.

In the ninth, Nelson Cruz walked, but Sulser got Hernandez to ground out before striking out Franco. The game ended when Keibert Ruiz grounded out to second.