Marlins’ Sandy Alcantara looks to reel in win vs. Braves 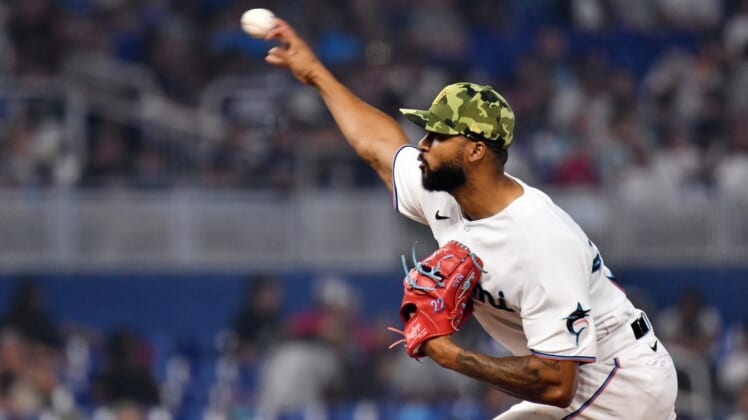 Sandy Alcantara, the established ace of the Miami pitching staff, will be matched up against a rookie trying to hold onto his position Saturday when the visiting Marlins meet the Atlanta Braves.

Alcantara (4-2, 2.11 ERA) pitched a complete game in his last turn on Sunday against the Braves. The right-hander struck out seven on 115 pitches — both season highs — en route to producing the fourth complete game.

“When Sandy’s out there, you kind of feel like he’s better than anybody you’ve got down there,” Miami manager Don Mattingly said. “You don’t want to take him out if he’s still throwing the ball good.”

Alcantara, 26, has averaged eight innings over his last three outings dating back to May 11, posting an 0.75 ERA while striking out 18 and allowing only 11 hits. He was named the National League Player of the Week after winning both his decisions and allowing only one earned run over 17 innings.

Alcantara is 3-1 with a 1.83 ERA in eight career starts versus the Braves. Atlanta hitters are batting only .176 against Alcantara.

Left-hander Tucker Davidson is the latest young arm to try to nail down the spot at the No. 5 starter. The Braves have tried Kyle Muller, Huascar Ynoa and Bryce Elder with mixed results.

Davidson (1-1, 8.71) showed great promise in his first start on May 17 when he threw five shutout innings against Milwaukee. He followed that up by allowing five runs on four hits with four walks in 2 2/3 innings in a loss to Philadelphia six days later.

“This is a great opportunity for him,” Atlanta manager Brian Snitker said. “We need someone to fill that spot and he really made a nice statement (against Milwaukee) that he wants it.”

Davidson, 26, has yet to face Miami in his career.

It isn’t known whether Alcantara will face slugger Ronald Acuna Jr. on Saturday.

Acuna had missed three games with a right quadriceps strain and did not start on Friday. But he came off the bench to deliver a dramatic pinch-hit double that changed the game’s momentum and led to a 6-4 win for the Braves.

“Before the game they told me to stay loose, stay warm and we’ll try to get you in the game,” Acuna said. “You know me, I’m always ready to play. I honestly feel good, but we’ll just keep taking it day by day and hope I’ll continue to feel good.”

“It’s good to have success against any team,” Acuna said. “I can say now I love playing against the Marlins.”

Snitker said it wasn’t certain if Acuna would return to the starting lineup on Saturday. He will wait to hear from trainer George Poulis before the game.