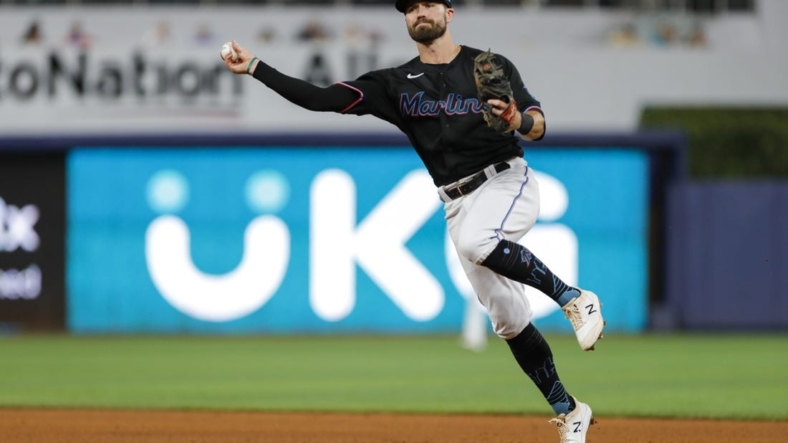 Sandy Alcantara struck out 10 and scattered just six hits, leading the host Miami Marlins to a 2-1 win over the Los Angeles Dodgers on Saturday night.

Alcantara got Joey Gallo to ground out with the bases loaded in the ninth, ending the game. One pitch before the final out, Alcantara nearly hit him, which would have brought in the tying run.

Mookie Betts led the Dodgers with a homer, his 30th of the season. In the first two contests of this four-game series, Betts is batting 5-for-10 with three homers, one double and five RBIs.

Alcantara (12-6), considered a frontrunner for the National League Cy Young Award, walked just one batter in a 111-pitch effort.

He leads the majors with 185 2/3 innings pitched. It was his fifth nine-inning effort of the season.

Prior to the game, Alcantara was 0-3 with a 14.79 ERA in four career starts against the Dodgers.

Dodgers starter Dustin May (1-1) took the loss in just his second game of the year. Both of them have been against the Marlins.

May, coming off elbow surgery, allowed five hits, one walk and two runs in six innings. He struck out four.

Los Angeles opened the scoring in the third on Betts’ 411-foot homer to left-center.

Miami tied the score 1-1 in the fourth as Jon Berti singled, stole second and scored on Brian Anderson’s single.

However, an off-balance Anderson was called out at second after he was tagged out by second baseman Chris Taylor. Anderson, who felt he was pushed off the bag by Taylor, was then ejected by umpire D.J. Reyburn for arguing the call.

Jerar Encarnacion, who entered the game replacing the ejected Anderson, drilled a go-ahead RBI single in the sixth, giving Miami a 2-1 lead. With two outs and none on, that Miami rally began on a pair of infield singles by Joey Wendle and Berti.

Miami had a shot at increasing its lead in the eighth as Wendle hit a one-out double. He then took a large lead off second, and Dodgers reliever Phil Bickford picked him off to silence a potential surge.

Alcantara, though, made the slim lead stand with his brilliant outing.