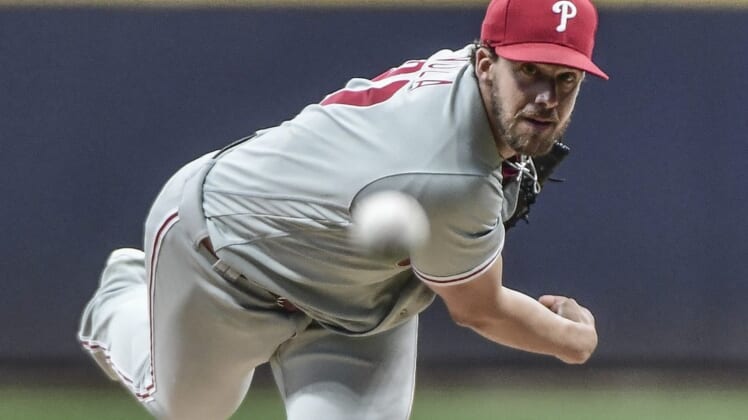 The Philadelphia Phillies’ nine-game winning streak came to a crashing halt Sunday in a 13-1 loss to the Arizona Diamondbacks.

It was the first loss under interim manager Rob Thomson after an 8-0 start. Joe Morgan won his first 12 games as manager of the Boston Red Sox in 1988.

Despite the ugly loss Sunday, which included 11 walks, the Phillies have worked their way back to .500. Now they’ll look to start a new streak when they host the Miami Marlins on Monday.

“We’ve gotta move on to tomorrow,” Thomson said. “We won the series. It’s a new series now. We’ve got to keep winning series.”

Still, the Phillies have been re-energized since Thomson took over for Joe Girardi on June 3.

“We didn’t play the sharpest today, and that’s what you can chalk it up to,” Kyle Schwarber said of the 11 walks. “We won the series. Still a lot of positives to what we’ve been doing, and that’s the biggest takeaway.”

The Phillies will hand the ball to right-hander Aaron Nola (4-4, 3.50 ERA) to start the three-game series with the Marlins. Nola holds a 4-8 record and a 3.59 ERA in 17 career starts against the Marlins.

Closer Corey Knebel is day-to-day as he deals with right shoulder soreness.

“I’d rather be out one, two days than go on the IL,” Knebel said. “I’ve had injuries in the past and I’ve thrown through them, and then I get hurt. I’d just like this not to be an injury. Being overly cautious is a good thing right now.”

The Marlins had their five-game winning streak broken in a 9-4 loss to the Houston Astros on Sunday.

“We’ve got a tough stretch,” Marlins manager Don Mattingly said. “It never really stops. At this point of the season, we’ve got to think about winning series.”

Sandy Alcantara (6-2, 1.61) is scheduled to start for the Marlins. The right-hander has had success in his career against the Phillies with a 6-4 record and a 3.10 ERA in 11 starts.

In Alcantara’s most recent start against the Washington Nationals on Wednesday, he tossed nine scoreless innings and allowed six hits to go along with six strikeouts and no walks. He didn’t figure in the decision as the Marlins won 2-1 in 10 innings.

Alcantara extended his stretch of scoreless innings to 18.

“I think it’s my positive mentality,” Alcantara said after the strong outing. “I just want to go out and compete. Sometimes you have bad days, like me. But you can’t worry about it because I know I can do better the next time.”

Avisail Garcia was scratched shortly before Sunday’s game with left hand inflammation, and it’s unknown whether he’ll be in the lineup on Monday. Garcia told reporters that he’s scheduled to have an MRI test performed.

“I don’t know,” Mattingly said when asked how serious he believed the injury could be. “It happened so fast. It happened right before the game.”