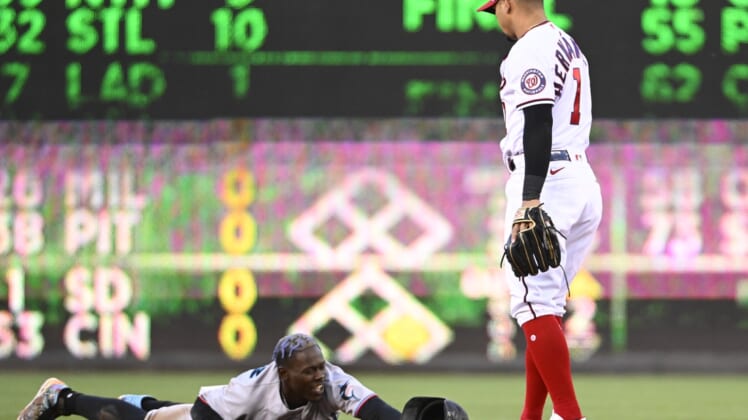 Jesus Aguilar homered, Pablo Lopez continued his sensational start to the 2022 season with six scoreless innings and the Miami Marlins defeated the slumping Washington Nationals 2-1 on Wednesday night for their fourth straight win.

Lopez (3-0) allowed three hits, walked one and struck out six while lowering his earned run average to 0.39. He has pitched 18 1/3 scoreless innings while striking out 17 and walking three in winning his past three starts.

Aguilar hit a solo homer, his first of the season, and Jazz Chisholm Jr. had two hits for Miami.

Anthony Bender pitched 1 1/3 innings for his fourth save.

Maikel Franco had two hits for the Nationals. They have lost seven straight games and have scored three runs or less in each of their past eight games.

Washington’s Cesar Hernandez reached on Aguilar’s error with two outs in the eighth. Tanner Scott came on and induced an infield pop from Juan Soto, but Chisholm couldn’t make the catch, putting runners on first and third. Scott then walked Josh Bell and Nelson Cruz to force in Washington’s run.

Franco lined a single off the leftfield wall with two outs in the ninth, but Lucius Fox flied to left.

Washington starter Erick Fedde, who began the night 4-0 with a 1.43 ERA in his career against Miami, was good but couldn’t match Lopez. Fedde (1-2) allowed two runs on three hits in 4 2/3 innings. He struck out five and walked three.

With two outs in the third, Aguilar got ahead of Fedde 3-1 and homered to left center on a sinker.