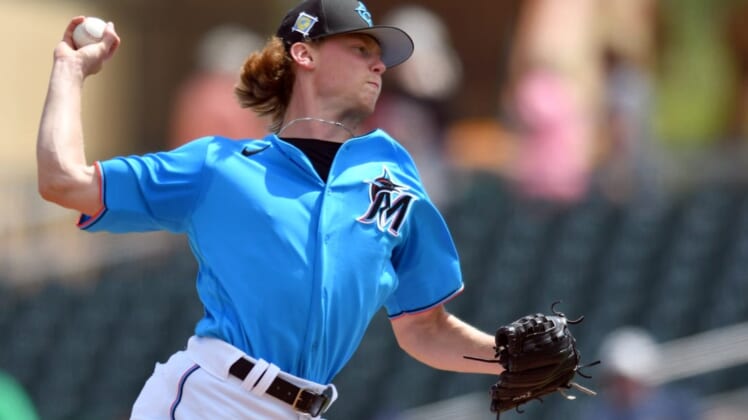 Saturday is set to be a big day for the Miami Marlins.

Right-hander Max Meyer — one of the top pitching prospects in baseball — is set to make his major league debut against the visiting Philadelphia Phillies.

Pitching is clearly Miami’s strength. Sandy Alcantara (9-4, 1.76 ERA), who struck out 12 batters but took a tough-luck loss to the Phillies on Friday in the series opener, is headed to the All-Star Game next week.

Right-hander Pablo Lopez is a strong second starter for the Marlins. Lefties Trevor Rogers, an All-Star last year before struggling this season, and Braxton Garrett have shown flashes.

In addition, right-handers Edward Cabrera and Sixto Sanchez are recovering from injuries but have vast potential. And right-hander Eury Perez is ranked ahead of even Meyer in the minors.

Then there’s Meyer, who was the third overall pick in the 2020 draft out of the University of Minnesota. Meyer, 23, was rated as having the most dominant pitch in that draft — an electric slider that he pairs with a mid-90s fastball.

Meyer, who has hit 100 mph but sits mostly 93-95 with his fastball, also has a developing changeup, according to Marlins director of amateur scouting DJ Svihlik.

“We see Max as a playoff starter,” Svihlik said. “He is competitive and tenacious, and his changeup is becoming a weapon.”

“I’ve always thought I was big-league ready,” Meyer said, “even when I was in high school.”

The Phillies are expected to counter Meyer with veteran left-hander Ranger Suarez (6-5, 4.33 ERA).

Suarez, 26, is in his fifth major league season, and he has worked mostly as a reliever. This year, though, he has made a career-high 15 starts, and the Phillies are 9-6 in those games.

However, he has not pitched since June 29 due to back spasms. He is in line to be activated from the injured list on Saturday.

Suarez beat the Marlins the only time he faced them this year, winning 10-3 on April 16 in Miami after allowing two runs in five innings. For his career, Suarez is 3-1 with a 3.60 ERA in 14 games against the Marlins, including three starts.

Suarez is not the only Phillies player set to return from injury. Third baseman Alec Bohm, who dislocated his left ring finger on Monday, is expected to rejoin to the starting lineup on Saturday.

“That’s remarkable,” Phillies interim manager Rob Thomson said of Bohm’s quick return. “I’m shocked after looking at (his finger) the other night. Our trainers did a great job.”

The Marlins also have their share of injury news. Left fielder Jorge Soler (pelvis) returned on Friday after having been out since June 29. Shortstop Miguel Rojas has remained in the lineup despite getting a tooth knocked out in a collision on Thursday against the Pittsburgh Pirates.