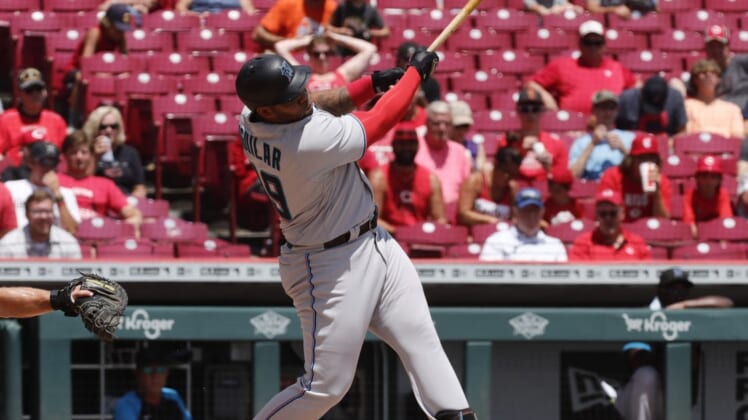 Jesus Sanchez hit a pinch-hit home run to tie the score in the ninth and Joey Wendle followed with a go-ahead RBI double as the Miami Marlins rallied to defeat the host Cincinnati Reds 7-6 on Thursday afternoon.

Jesus Aguilar went 3-for-4 with four RBIs to lead Miami’s offense. He followed Wendle’s double with a sacrifice fly that proved to be the winning run. He also blasted a two-run homer measured at 419 feet and added an RBI double.

Marlins reliever Zach Pop (2-0) pitched a perfect eighth, and closer Tanner Scott pitched out of a jam in the ninth to earn his 14th save.

With two outs in the bottom of the ninth, Tommy Pham’s RBI single off Scott closed Cincinnati’s deficit to 7-6. But with runners on first and second, Scott struck out Joey Votto swinging at a high, 97-mph fastball.

Marlins starter Daniel Castano lasted just two-thirds of an inning after he was hit in the face by a 104-mph line drive off the bat of Donovan Solano. The ball struck Castano’s forehead and landed in the glove of third baseman Wendle for an out.

Castano, who allowed two hits and one run, was likely helped from further physical damage by his cap. The Marlins said he suffered a forehead contusion and a mild concussion.

Reds starter Graham Ashcraft left with a lead but settled for a no-decision. He allowed four runs (three earned) on eight hits and two walks in 6 2/3 innings.

Reliever Hunter Strickland (2-3) took the loss, allowing three runs in the ninth and failing to get an out.

Cincinnati opened the scoring in the first. With one out, Brandon Drury smashed a line-drive double past a diving Wendle. Drury raced home when the next batter, Pham, drove a double to right-center.

Miami took a 2-1 lead in the third as Jacob Stallings singled and Aguilar homered on a 97-mph fastball.

The Marlins used a pair of singles to stretch their lead to 3-1 in the fourth. Lewin Diaz’s single started the rally, and he moved to second on a passed ball. Miguel Rojas had the RBI single.

Cincinnati tied the score in the bottom of the fourth as consecutive one-out singles by Matt Reynolds and Nick Senzel started the rally. Tyler Naquin got a run-scoring groundout, and Mark Kolozsvary drove an RBI double to right-center.

The Reds took a 4-3 lead in the fifth on singles by Pham, Votto and Solano. Cincinnati made it 5-3 in the sixth on Naquin’s 417-foot homer.

Miami cut its deficit to 5-4 in the seventh on doubles by Stallings and Aguilar.

The Marlins completed their rally in the ninth. Sanchez led off with his 361-foot homer to right. Luke Williams walked and Stallings was hit by a pitch, knocking Strickland out of the game. Buck Farmer entered and allowed Wendle’s double and Aguilar’s sacrifice fly.