Marlins hope for more magic from Jesus Luzardo vs. Cardinals 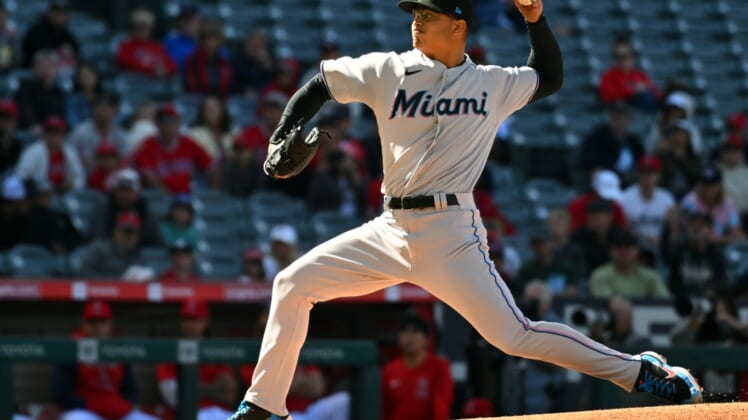 Miami Marlins lefty Jesus Luzardo, coming off a career-high 12-strikeout performance, is set to face the visiting St. Louis Cardinals on Tuesday night in the start of a three-game series.

Luzardo got those dozen punchouts in just five innings last Tuesday, allowing two hits, one walk and one run in a no-decision against the Los Angeles Angels.

“He had everything going,” Marlins manager Don Mattingly said of Luzardo, whose four-seam fastball averaged a career-high 97.6 mph, according to NBC Sports.

Half of Luzardo’s 76 pitches against the Angels were curveballs, and of the 13 times Angels batters swung at the curve, 12 came up empty. Luzardo also got nine called strikes on the curve.

All of that is huge news for Luzardo, who struggled last year with the Oakland A’s and Marlins, combining for a 6-9 record and a career-worst 6.61 ERA.

Luzardo has never faced the Cardinals, but he is 4-2 with a 5.68 ERA in nine career starts in Miami.

On Tuesday he figures to face a Cardinals lineup that includes veterans such as designated hitter Albert Pujols, 42, and catcher Yadier Molina, 39.

However, Molina, a 10-time All-Star and a nine-time Gold Glove winner, has been given a reduced workload so far this season, batting .133 in five games.

“We’ll ease him in,” Cardinals manager Oliver Marmol said. “Playing the long game here is better than rushing him in.”

Backup catcher Andrew Knizner, 27, is off to a good start, batting .333 in four games in support of Molina.

Pujols is also not a full-time starter, splitting time with lefty-swinging Corey Dickerson, who played for the Marlins in 2020 and 2021.

The Cardinals on Tuesday will start another graybeard in 40-year-old right-hander Adam Wainwright (1-1, 3.48 ERA).

Wainwright went 17-7 with a 3.05 ERA last year and received Cy Young Award votes for the fifth time in his career, finishing seventh in voting. A three-time All-Star with two Gold Gloves to his credit, Wainwright is 6-2 with a 3.08 ERA in 14 career appearances (12 starts) against the Marlins.

Second baseman Tommy Edman won his first Gold Glove last year and stroked 41 doubles, ranking second in the NL. Shortstop Paul DeJong was an All-Star in 2019 when he slugged a career-high 30 homers, although he has not played up to that level since.