Marlins hold on to win series from Pirates 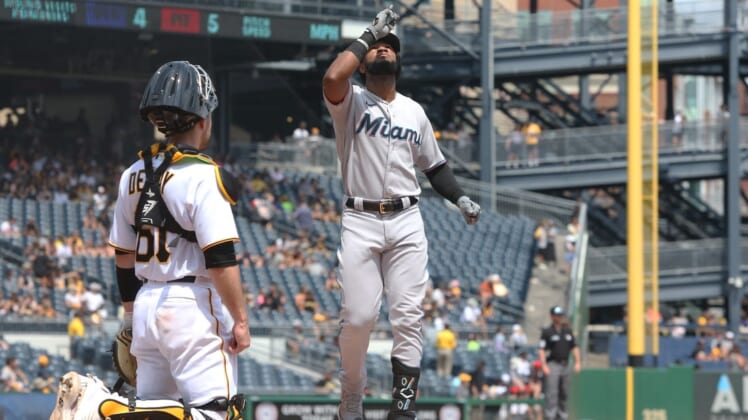 Run-scoring singles by Nick Fortes and Miguel Rojas in the 10th inning Sunday gave the visiting Miami Marlins a 6-5 win over the Pittsburgh Pirates to take two of three in a weekend series.

Pinch-runner Nick Williams opened at second in the 10th. Fortes singled to right against David Bednar (3-4), driving in Williams, and went to second on Cal Mitchell’s fielding error. Fortes went to third on Joey Wendle’s groundout and scored on Rojas’ single to left.

Mitchell’s RBI single in the bottom of the 10th against Jeff Brigham (first save) produced the final score.

Bryan De La Cruz homered and hit an RBI single, and Jesus Aguilar hit a two-run single for the Marlins.

Anthony Bass (2-3) gave up two runs in the ninth when Pittsburgh tied it.

Oneil Cruz homered and Yoshi Tsutsugo hit a two-run single for the Pirates.

Cruz led off the third with his fifth homer, to right, for a 1-0 Pittsburgh lead.

With one out in the fifth, De La Cruz hit his seventh homer, to left, to tie it.

In the sixth, the Marlins’ Jacob Stallings got hit with a pitch and went to second on Wendle’s bunt single. Both advanced on Rojas’ sacrifice bunt, then scored on Aguilar’s single to left to make it 3-1.

In the bottom of the sixth, Josh VanMeter walked. Ke’Bryan Hayes reached and sent VanMeter to third on an infield hit. VanMeter scored on Ben Gamel’s sacrifice fly, cutting it to 3-2.

In the ninth against Duane Underwood Jr., Miami’s JJ Bleday doubled to right-center with two outs and scored on De La Cruz’s single to left to push it 4-2.

In the bottom of the ninth, Mitchell singled to left and went to third when Greg Allen reached on Aguilar’s error at first. Allen went to second on the play. An out later, Tsutsugo drove in both runners with a single to right.