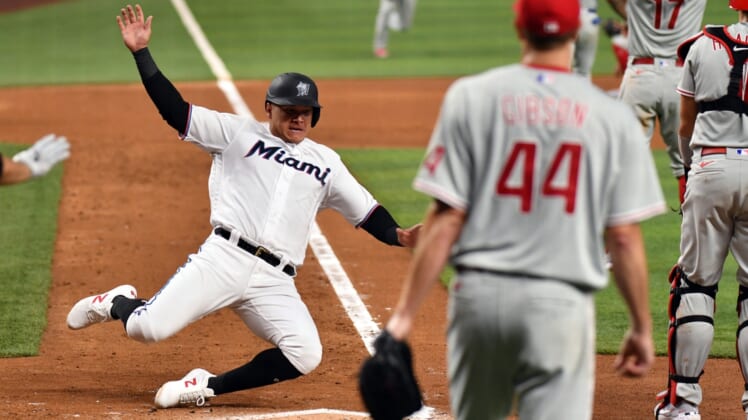 Joey Wendle stroked a go-ahead, two-run double in the fourth inning, helping the Miami Marlins win their home opener, 4-3, over the Philadelphia Phillies on Thursday night.

Garrett Cooper slugged a solo homer in the fourth and had a fielding gem in the ninth, and Sandy Alcantara (1-0) was charged with two runs in 6 1/3 innings as the Marlins snapped a three-game losing streak.

Alcantara worked around seven hits — including a pair of doubles — and one walk.

Anthony Bender pitched a scoreless ninth for Miami — getting Harper as the final out — for his second save of the year.

The Phillies got a walk from Rhys Hoskins and a double from Johan Camargo in the fourth. But Alcantara kept the Phillies off the board by getting two straight pop-ups, from Bryson Stott and Matt Vierling.

Miami took a 3-1 lead in the bottom of the fourth. Cooper started the rally by pulling his homer just inside the left-field pole.

Jesus Sanchez followed with a triple. With two outs, Avisail Garcia drew a walk — the first issued by Gibson this year — and Wendle fouled off two straight pitches before flicking a 2-2 cutter to left for his two-run double.

A pair of walks got Gibson in trouble in the fifth, and Miami cashed in as Sanchez lofted an opposite-field RBI single to left, making it 4-1.

The Phillies cut their deficit to 4-3 in the seventh. Vierling was hit by a pitch, ending Alcantara’s night. Reliever Steven Okert walked Realmuto before Harper pulled a two-run double to right. Reliever Anthony Bass got Nick Castellanos on a foul pop for one of the game’s biggest outs.

In the eighth, with a runner on third, Harper saved a run by racing back to catch Jacob Stallings’ deep drive to right.

Philadelphia’s Alec Bohm hit a leadoff single in the ninth, but Schwarber bounced into a double play that ended with Cooper’s short-hop scoop at first. After Realmuto singled, Bender got Harper on a flyout to end the game.