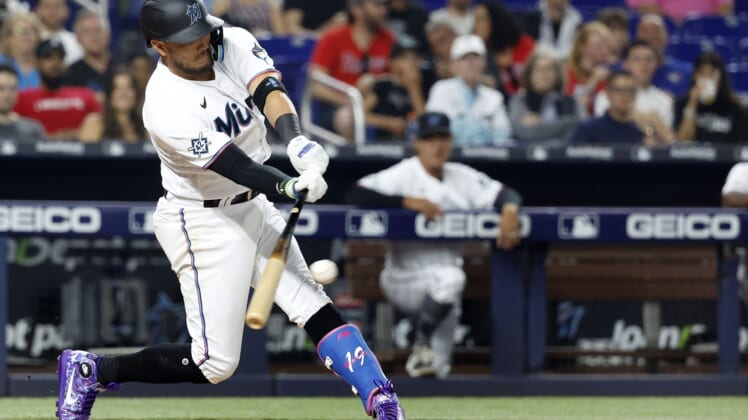 Jesus Sanchez tripled, doubled and drove in two runs, leading the host Miami Marlins to a 7-1 win over the Philadelphia Phillies on Friday night.

The Phillies, who have lost four straight games, managed eight hits. Rhys Hoskins led Philadelphia’s offense, going 2-for-3 with a pair of doubles, and Nick Castellanos, a South Florida native, spoiled the shutout bid with an eighth-inning homer.

However, Phillies right fielder Bryce Harper — the reigning National League MVP — went 0-for-4 with three strikeouts and is batting just .138 this season.

Marlins third baseman Joey Wendle went 1-for-4 with a single and a stolen base, but his performance was noteworthy because of his fielding gem. In the third inning, he moved to second base as part of a shift on Kyle Schwarber. Wendle, moving to his left, stabbed Schwarber’s hard one-hopper, robbing a hit and also starting a double play.

Zach Eflin (0-1) took the loss, allowing six hits, one walk and four runs in four innings. He struck out four.

Miami hadn’t scored a first-inning run this year until Friday. The Marlins started their initial rally with doubles from Jorge Soler, batting leadoff, and three-hole hitter Sanchez. Aguilar followed with an RBI single to give Miami a 2-0 lead.

The Marlins doubled their advantage in the second as Jacob Stallings and Miguel Rojas singled before both of them scored on Jazz Chisholm Jr.’s triple to right.

Miami made it 6-0 in the fifth. Working against reliever Nick Nelson, Miami got a double from Garrett Cooper, Sanchez’s RBI triple and Aguilar’s sacrifice fly.

The Marlins made it 7-0 in the sixth, loading the bases on walks to Chisholm and Soler plus a Cooper hit-by-pitch before Aguilar cashed in with another sacrifice fly.

Philadelphia put runners on second and third in the seventh. But Simon Muzziotti lined out to Wendle at third, and reliever Richard Bleier trotted in and struck out Schwarber on four pitches.

The Phillies finally got on the board with two outs and none on in the eighth as Castellanos got a 1-2 cutter from reliever Shawn Armstrong, hitting it over the fence in right.