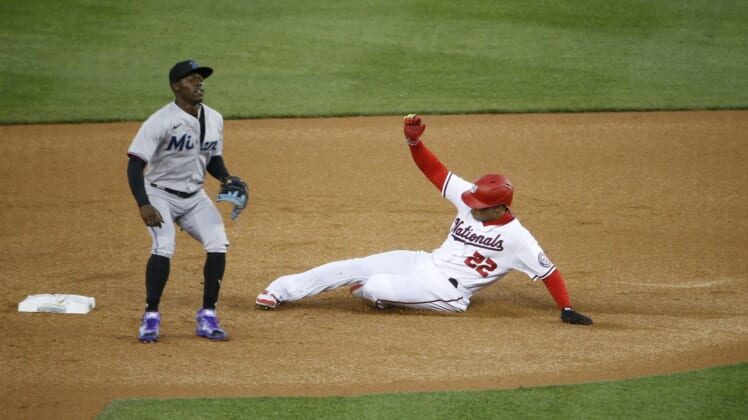 Joey Wendle slugged a three-run homer on his 32nd birthday, and Sandy Alcantara pitched a gem as the visiting Miami Marlins defeated the Washington Nationals 5-2 on Tuesday night in Washington, D.C.

The Marlins, who have won three straight games, also threw two Nationals out at the plate — once by center fielder Jesus Sanchez and the other by right fielder Avisail Garcia.

Wendle hit his first homer as a member of the Marlins. Acquired in a trade with the Tampa Bay Rays in November, Wendle is batting .362 this season after going 2-for-3 with a walk and a steal.

Alcantara (2-0) allowed just one run in six innings, striking out five and lowering his ERA to 1.78. He allowed six hits and three walks but was helped by two double plays and the two outfield assists.

By the end of his outing, Alcantara was still throwing 100 mph.

Anthony Bender pitched a scoreless ninth for his third save, tying his total from last season’s rookie year.

Miami opened the scoring in the fourth as Sanchez walked, Garrett Cooper singled and Wendle slugged his homer 410 feet to right-center. Wendle jumped on a first-pitch slider clocked at 83 mph.

Washington cut its deficit to 3-1 in the bottom of the fourth. Juan Soto and Josh Bell drew walks, and Yadiel Hernandez earned an RBI with his single to center.

The Nationals could have had more on Keibert Ruiz’s single, but Sanchez’s one-hop threw got Bell at the plate. Maikel Franco followed with another single, but Garcia’s two-hop throw nailed Hernandez at home.

Miami stretched its lead to 4-1 in the sixth. Cooper doubled on a line drive that one-hopped the wall in left. With two outs, Cooper scored on a Jacob Stallings single that bounced off the glove of leaping shortstop Alcides Escobar.

The Marlins made it 5-1 in the eighth. Wendle singled, stole second, went to third on catcher Ruiz’s throwing error and scored on Stallings’ groundout.

Washington got that run back in the bottom of the eighth as Soto doubled with one out, and Bell singled on a 111-mph liner just past reliever Richard Bleier’s glove.