Marlins erupt in 5th to cruise past Rangers 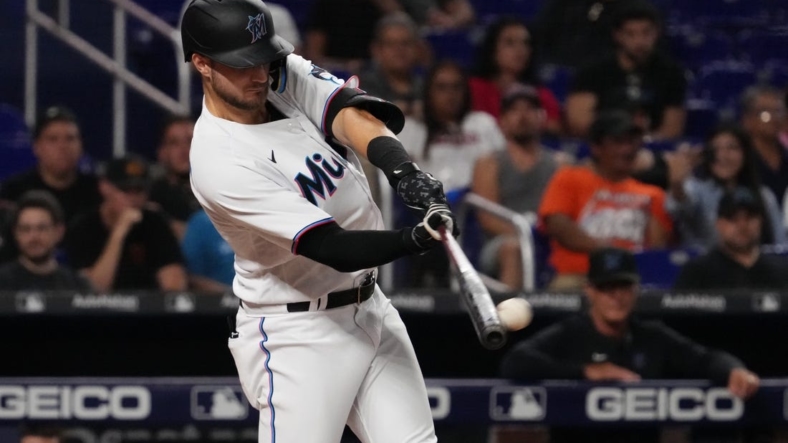 Rookie Charles Leblanc hit a pair of RBI doubles during an eight-run fifth inning as the host Miami Marlins defeated the Texas Rangers 10-6 in the second game of a doubleheader on Monday night.

The Rangers won the first game 3-2.

Marcus Semien led Texas in the second game, going 3-for-4 with three RBIs and two runs. He fell a double short of the cycle.

Miami sent 12 batters to the plate in the eighth inning, including Jon Berti, who had a go-ahead two-run single. The Marlins had not scored eight runs in a game since July 22.

Berti stole two bases in the win, and he leads the majors with 34 steals.

Reliever A.J. Alexy (1-1) took the loss, allowing four runs on one hit with three walks in one-third of an inning.

Neither starter earned a decision, and both were making their first starts off the injured list.

Miami’s Braxton Garrett fell one out short of a win, allowing two hits, two walks and two runs in 4 2/3 innings. He struck out four.

Miami used speed to score a first-inning run. Berti reached on an error by first baseman Nathaniel Lowe, stole second and scored on Joey Wendle’s single to right. On the error, third baseman Josh Jung fielded a grounder and threw to first, where Lowe collided with Berti while he was attempting to catch the ball.

Jung, Texas’ first-round pick in 2019, jumped on a first-pitch fastball in the fifth inning, tying the score with his second major league homer.

Later in the fifth, Bubba Thompson drew a two-out walk, and Texas took a 3-1 lead on Semien’s two-run homer.

But the Marlins came back in the bottom of the fifth with their offensive outburst. In addition to Leblanc’s doubles, Berti, Brian Anderson, Garrett Cooper and Nick Fortes all had run-scoring hits.