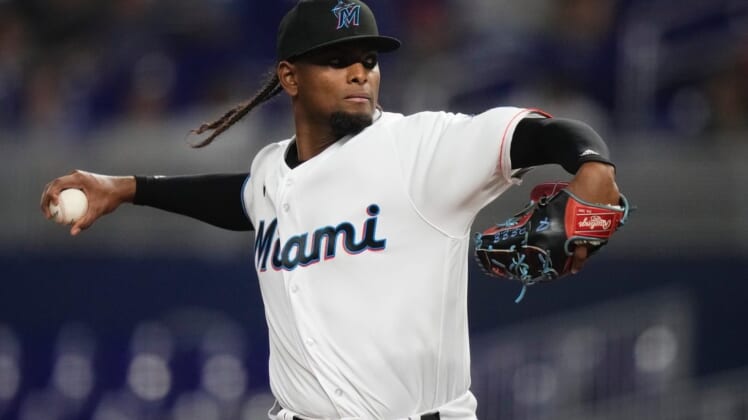 Right-hander Edward Cabrera is making his bid to earn a spot in the Miami Marlins’ rotation for 2023, and, so far, it’s working.

Cabrera (3-1, 2.05 ERA) will start on Tuesday night for the host Marlins against the San Diego Padres.

The Marlins are 3-2 this year when starting Cabrera, who has never faced the Padres. Cabrera has yet to go longer than 6 1/3 innings in any of his 12 career starts, including seven last year.

The Marlins, who beat the Padres 3-0 on Monday in the series opener, haven’t won consecutive games since July 13-14.

In the month-plus since then, the Marlins are 8-20.

Last week, Marlins manager Don Mattingly expressed frustration that the organization is out of playoff contention and once again fielding a roster full of rookies.

Even so, it’s comforting that Mattingly is still able to play some veterans such as shortstop Miguel Rojas, 33.

On Monday, Rojas belted three hits, and he also took an extra base off Padres left fielder Jurickson Profar, turning a double into a triple.

“It’s good to see (Rojas) use the whole field, getting back to being himself,” Mattingly said, “not trying to do too much.”

If the Marlins need a save on Tuesday, it likely won’t come from closer Tanner Scott, who has pitched in the past two games.

After blowing a save against the Atlanta Braves on Sunday, Scott nailed down the Monday victory. He won a 12-pitch battle versus San Diego’s Ha-Seong Kim, who lined out to second baseman Jon Berti, ending the game. Prior to the lineout, the previous six pitches were foul balls.

“Redemption,” Scott said. “I had a sigh of relief when Berti showed his ‘Michael Jordan ups.’ I was so happy when that happened.”

This year, the Padres are 11-10 when starting Manaea, including an 8-0 loss to the Marlins on May 7. Manaea earned a quality start in that game, striking out eight batters and walking one while allowing three runs in six innings.

The Padres, who have won four of their past six games, had an off night at the plate on Monday.

However, even though the Padres got blanked in the opener at Miami, San Diego manager Bob Melvin likes the look of his offense after the recent acquisition of right fielder Juan Soto, first baseman Josh Bell and infielder/designated hitter Brandon Drury.

San Diego’s Wil Myers went 3-for-4 with two RBIs from the No. 8 spot in the lineup on Sunday against the Washington Nationals, then came off the bench to collect a single on Monday.