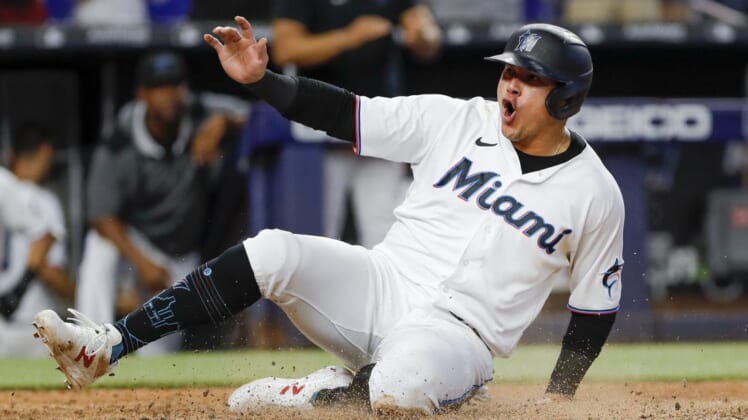 Brian Anderson delivered a two-run, walk-off triple in the 11th inning to lift the Miami Marlins to a 3-2 win against the visiting Pittsburgh Pirates in the finale of their four-game series on Thursday afternoon.

Ben Gamel doubled home Yoshi Tsutsugo in the top of the 11th to give the Pirates a 2-1 lead. After Avisail Garcia opened the bottom of the inning with a single that moved automatic runner Jesus Aguilar to third, Anderson followed through with a hit to the gap in right-center.

Richard Bleier (2-1) pitched the 11th for the Marlins, who won the final two games of the series to earn the split.

Pirates starter Zach Thompson allowed one run and four hits in 6 2/3 innings. He struck out two and walked three.

Billy Hamilton singled with two outs in the fifth, and the speedster appeared to be thrown out on a head-first slide into home while trying to score on a double by Joey Wendle. The call was overturned on review, however, giving the Marlins a 1-0 lead.

The Pirates tied the score 1-1 in the eighth off reliever Steven Okert.

Tsutsugo reached on an infield single with two outs and scored from first on an error by Anderson at third on a Diego Castillo’s ground ball down the left-field line.

The Marlins loaded the bases with one out in the eighth off Chase De Jong, but Garcia hit into an inning-ending double play.

The Pirates also failed to capitalize on several scoring opportunities earlier in the game.

Ke’Bryan Hayes tripled to right field with one out in the first, but Garrett came back to strike out Michael Chavis and then got Tsutsugo to ground out to second.

The Pirates also left a runner in scoring position in the second, fourth and fifth innings before Garrett struck out the side in the sixth.

Anthony Bass relieved Garrett to start the seventh and surrendered back-to-back singles to Jake Marisnick and Oneil Cruz to put runners on the corners. But Daniel Vogelbach struck out, Cruz was caught stealing second and Marisnick was later caught stealing home to end the inning.

Both teams had a runner on third with one out in the 10th and couldn’t score.