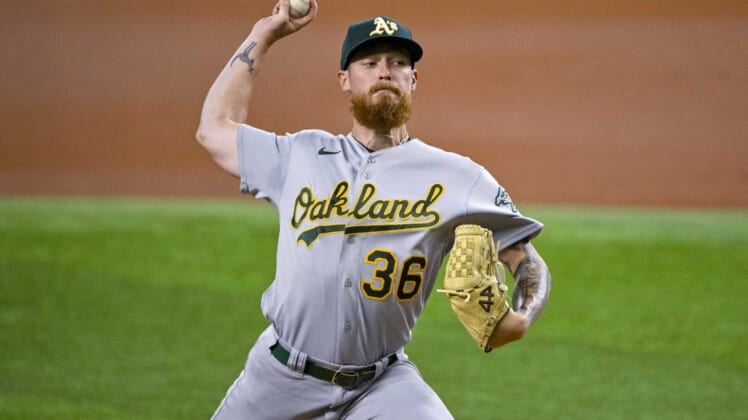 The Miami Marlins will get a chance to catch their breath amid a rugged stretch of the schedule when they open a three-game road series against the Oakland Athletics on Monday night.

It’s no surprise then that neither of Monday’s scheduled starting pitchers has ever faced the opponent.

When the clubs last met, Marlins right-hander Edward Cabrera (now 3-1, 1.78 ERA) was pitching for Batavia in the short-season Class A New York-Penn League, and A’s righty Adam Oller (2-5, 6.63) was at Class A West Virginia.

Despite now having three rookies in their starting rotation, the A’s have won four of their past six games, including two straight over the weekend at home over the playoff-contending Mariners. Oller pitched one of those four wins in his best outing of the season, holding the Texas Rangers to one run in six innings in a 7-2 win on Wednesday.

JP Sears, who got the win in the A’s 5-3 victory over the Mariners on Sunday, insisted after the game that he’s not surprised Oakland’s rookie pitchers are performing well on the big stage.

“Rookie status is in your head,” Sears said. “No matter if it’s in Low-A or Triple-A or the big leagues, we’re going to go out and compete and give it all we have. A lot of us who are rookies are excited with this opportunity and are looking forward to this league and this continued opportunity.”

The Marlins, who were a respectable 49-59 on Aug. 7, have since gone 3-10 in a stretch where they’ve faced the Atlanta Braves four times and the Phillies, Padres and Los Angeles Dodgers three times each.

The Marlins have lost four straight, including 10-3 to the Dodgers on Sunday.

After facing the A’s, it’s back into the frying pan for Miami, with 15 straight against the Dodgers (four), Tampa Bay Rays (two), Braves (three), Phillies (three) and New York Mets (three).

“The bright spot is that we still compete every night,” Marlins manager Don Mattingly praised over the weekend in Los Angeles. “It’s been Philly and the Padres, and now (the Dodgers) … In general, (the starting pitchers) have kept us in games and given us a chance.”