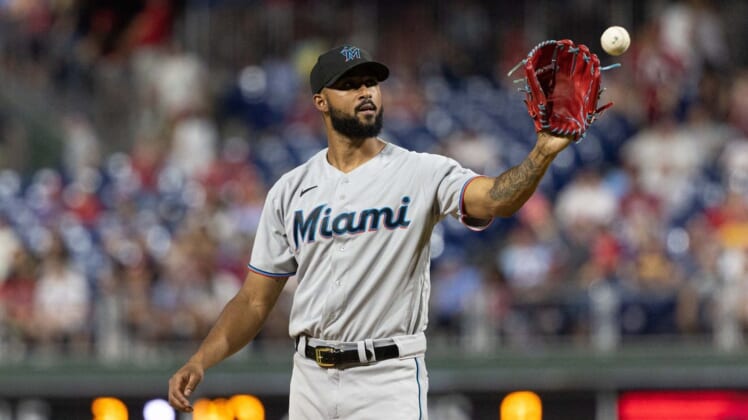 The Miami Marlins will go from one extreme to another Sunday as Cy Young Award candidate Sandy Alcantara takes the mound for the series finale against the host Los Angeles Dodgers.

Alcantara (11-5, 1.92 ERA) will pitch for the Marlins one day after right-hander Bryan Hoeing made his major league debut as an emergency starter in place of injured left-hander Braxton Garrett.

Hoeing’s first taste of the major leagues against one of baseball’s best offenses went about as expected. The Dodgers scored seven runs in the first three innings — six on home runs by Will Smith and Justin Turner — while finishing off a 7-0 victory.

The Dodgers were 2-1 winners on Friday to open the series.

Alcantara last took the mound at Dodger Stadium on July 19 in the All-Star Game and pitched a scoreless second inning with two strikeouts. The Marlins ace would have been a worthy National League starter, but the Dodgers’ Clayton Kershaw was given the nod instead in his home park.

Alcantara’s most recent regular-season start at Dodger Stadium came last year when he was rocked for eight runs on seven hits in just 1 1/3 innings. Los Angeles’ Max Muncy hit a three-run home run to cap an eight-run second inning of the May 14 contest.

In three career starts against the Dodgers, Alcantara is 0-2 with a 14.81 ERA.

On Monday at home against the San Diego Padres, Alcantara went seven scoreless innings with seven strikeouts to pick up the win. It was his seventh outing this season of at least seven innings when he did not allow a run.

“We’ve talked about this a number of times, that the bright spot is that we still compete every night, and it’s really the fact that these guys are going out and keeping you in a game on a daily basis for the last three series,” Marlins manager Don Mattingly said. “In general, these guys have kept us in games and given us a chance.”

While the Marlins will go with an arm they have come to depend on, it is the Dodgers who will have to see what they can get from the mound. Right-hander Ryan Pepiot (1-0, 4.26) will make his seventh career start and his first against Miami.

In his third stint with the Dodgers this season, after making his major league debut May 11, Pepiot still is working on control issues. He walked five batters in 4 2/3 innings Tuesday at Milwaukee, matching the five he walked at Pittsburgh in his debut.

Perhaps Pepiot can take a lesson from Dodgers right-hander Dustin May, who returned Saturday after 15 months away because of Tommy John surgery.

May walked consecutive Marlins batters on eight straight pitches out of the strike zone in the first inning, then rebounded to retire the last 13 batters he faced. He gave up one single and struck out nine.

As May spoke to the media after his outing Saturday, when asked about his first-inning stumble, he might as well have been talking to Pepiot.

“I just decided to throw strikes instead of balls,” May said, only partially tongue in cheek. “I just kind of let the hitters make their own mistakes instead of me. That’s the biggest thing for me is not trying to do too much and just put it in the zone.”