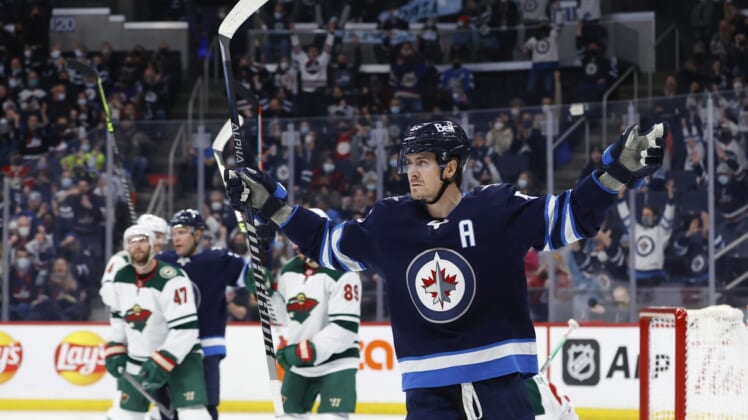 Mark Scheifele took a few days off during the All-Star break.

The rest seems to have done him some good.

The Winnipeg forward has scored a goal in each of the Jets’ five games since play resumed, including netting a natural hat trick in a 6-3 victory against the visiting Minnesota Wild on Wednesday night. That result pulled the Jets within five points of the final wild-card playoff berth in the Western Conference.

Scheifele will look to continue his streak Thursday night when the Jets play host to the expansion Seattle Kraken for the first time.

“I just went down south and got some sun, played some golf and spent some time with some buddies,” Scheifele said of his weeklong break. “Obviously the start of the year was a little funky, COVID, all the restrictions, that kind of stuff. It was nice to live my life a little bit.”

Perhaps it was all the sun he got on the links, but Scheifele has also switched to a tinted visor since returning to the ice.

“Maybe it’s just a placebo,” Scheifele said. “But I’ve liked the little bit of tint. Having blue eyes, they get a little bit sensitive every once and a while. Who knows?”

Scheifele finished Wednesday with four points, as did captain Blake Wheeler, who had assists on all three of Scheifele’s goals plus Paul Stastny’s empty-netter.

Scheifele registered his second hat trick of the season and the fifth of his career. He has seven goals and 11 points since the break as the Jets have gone 3-1-1. Linemate Wheeler has two goals and 10 points in that same span.

“For this team to win, our best players have to lead the way,” Jets interim coach Dave Lowry said. “They’ve played a lot of games together. They know where each other is going to be.”

The Jets rebounded from a listless 3-1 loss to the Chicago Blackhawks on Monday.

“Maybe we had sweet potatoes instead of mashed potatoes,” Scheifele said of the difference from one game to the next. “It’s hockey. Some of those days when you don’t have it, you’ve got to battle through the mud and find a way.”

The Kraken have lost two of three since the break, including a 6-2 defeat to the visiting Toronto Maple Leafs on Monday.

Thursday’s game will mark the return to Winnipeg for Kraken forward Mason Appleton, who played three seasons for the Jets before being selected in last summer’s expansion draft.

“Excited to get there and see some old faces and play the old buddies,” Appleton said after practice Wednesday. “It’s cliche to say, but it’s just another game. That’s kind of the way you try to approach it, even though it’s not, in a sense, but we’re just gonna go out and work hard.”

Even so, Appleton said it will be strange for him to play in Winnipeg.

“You try to not think about it as much as you can,” he said. “Just go about it like it’s normal, but going in the away side (dressing room) will definitely be different.”