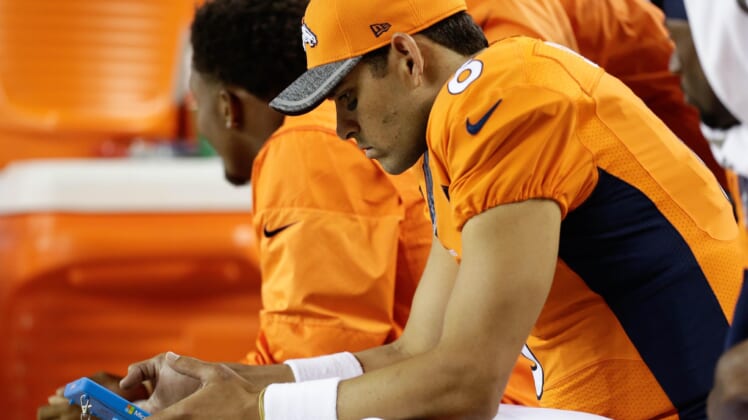 After Trevor Siemian threw an ill-advised pick-six to San Francisco 49ers safety Eric Reid (watch here), Sanchez had a chance to secure the job. Unfortunately, he couldn’t secure the football (twice), and finished the game on a whimper with some horrible play in the second half.

“It’s difficult playing like crap on two plays and ruining an opportunity. That’s difficult,” Sanchez said after the game, via Jeff Legwold of ESPN.

Sanchez looked like he was going to make head coach Gary Kubiak’s decision easy. He came into the game following Siemian’s interception and got the offense moving down the field, completing accurate pass after accurate pass en route to a field goal on his first drive.

He then engineered a 10-play drive that looked to score more points before Tank Carridine forced a fumble down at the 49ers’ 13-yard line.

The 49ers then fumbled the ball right back to Denver, but three plays later — once again in the red zone — Sanchez lost the ball for the second time.

“No doubt, I thought I came in, we had a lot of energy, moved the team right down the field, two drives of 70-plus yards and we’re rolling,” Sanchez said. “Going into my eighth year, I know better. I know I’ve got to get the ball out. I know I can play this game, and I know I’m better than I showed [Saturday]. . . . Two really bad plays that took away from a great performance and potentially winning a job, so that’s really too bad.”

Sanchez is correct saying that two bad plays took away from a great performance. But this is what he’s been doing his entire career. With every wonderful thing he does, he’s going to do something that makes you shake your head.

Both he and Siemian blew chances to solidify their spot as the deserving starter heading into Week 3, which is typically when starters play at least a half, if not three quarters in preparation for the regular season.

Kubiak said after the game that he isn’t ready to name a starter for Week 3 yet. At this point, it seems like Kubiak might be better off simply developing rookie Paxton Lynch, who looked really good after shaking off some early struggles.