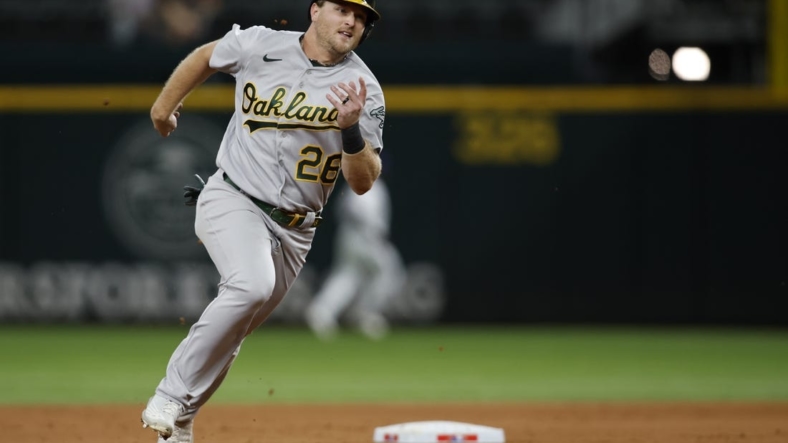 Mark Mathias hit a game-tying home run in the seventh inning, then belted a walk-off shot in the ninth, lifting the Texas Rangers to an 8-7 victory over the Oakland Athletics on Tuesday in Arlington, Texas.

With Corey Seager given the night off, Mathias batted second in the lineup. The move paid off with Mathias going 3-for-5 with four RBIs.

With one out in the ninth against Joel Payamps (3-5), Mathias ended it with a homer to left on a 2-1 fastball.

The Rangers battled back from a 7-2 deficit and tied it at 7 on Mathias’ two-run, opposite-field home run off Austin Pruitt in the seventh inning.

The game featured two rookie left-handed starters, each seeking his first major league win. Each settled for a no-decision.

Dermis Garcia put the A’s up on top early, belting a three-run home run with two outs in the first inning. Ragans retired the first two batters he faced, then allowed a single to Chad Pinder and walked Shea Langeliers. Garcia connected on a no-doubt drive to left field.

The Rangers chipped back with two runs in the bottom of the first. Semien doubled to open the inning, and with two outs, Adolis Garcia ripped a run-scoring double to the gap in left-center. Rookie Josh Jung followed with an RBI double.

In the fourth inning, the A’s put up their second three-run inning. Nick Allen had an RBI double, and Cristian Pache floated a two-run single to left.

The A’s chased Ragans in the fifth inning when Pinder hit a leadoff double. Taylor Hearn took over and yielded a one-out RBI double to Garcia.

Texas strung together doubles by Semien and Mathias in a three-run fifth inning, and Garcia blasted a two-run homer to left, making it a 7-5 game.