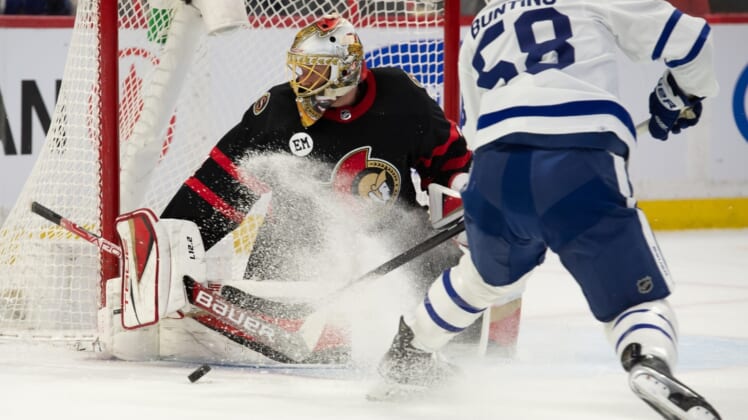 The Toronto Maple Leafs kept up their pursuit of the top spot in the Atlantic Division by beating the host Ottawa Senators 5-4 on Mark Giordano’s goal in overtime on Saturday.

Mitch Marner scored twice for Toronto, Michael Bunting added a goal and an assist, and Kyle Clifford and supplied a goal. Giordano added two assists for the Leafs (49-20-6, 104 points), who trail first-place Florida by eight points in the division. Rookie goalie Erik Kallgren made 25 saves for his sixth win of the season.

Tim Stutzle had two goals, Michael Del Zotto had one goal and an assist, and Dylan Gambrell also tallied for the Senators (28-40-7, 63 points). Anton Forsberg stopped 36 of 41 shots.

Marner’s second goal of the game, and 33rd of the season, tied the game 4-4 at 10:06 of the third period off assists from Bunting and Auston Matthews.

Giordano netted the winner at with 1:34 left in overtime off a long feed from William Nylander.

About 5 1/2 into the first period, Ottawa’s Brady Tkachuk got two minutes for cross-checking Justin Holl. The Leafs failed to score with the man advantage. At the 11:39 mark, the Senators’ Nikita Zaitsev served two minutes for tripping Matthews. Once again, Ottawa kept Toronto off the board.

Less than a minute after returning to full strength, Stutzle got a slap shot past Kallgren to give the Senators a 1-0 lead.

Ottawa then went on the offensive, scoring again with a Del Zotto wrister at the 15:25 mark to make it 2-0.

With 1:27 left in the period, Toronto went on the power play when William Nylander received two minutes for interference against Stutzle.

The Leafs killed off the penalty, which extended into the second period.

Just under three minutes into the second, the Leafs broke through when Clifford deflected a shot past Forsberg to trim the deficit to 2-1.

The Senators regained a two-goal lead at the 10:03 mark, with a Gambrell tip-in. Before the period was over, however, the Leafs scored twice to tie the game.

Stutzle’s second goal of the game and 20th of the season gave Ottawa the lead 6:10 into the third.