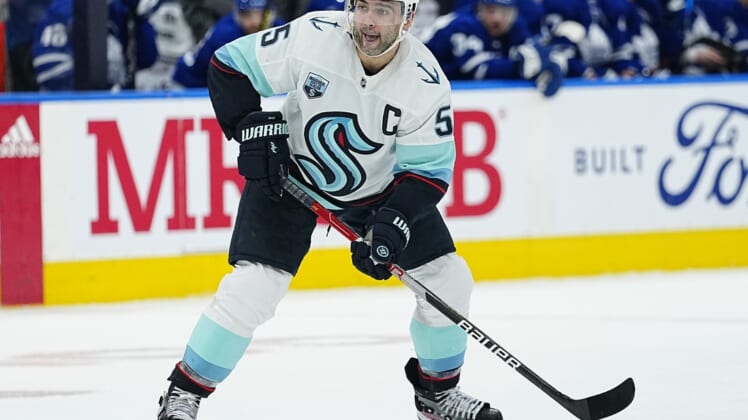 Mark Giordano will have his first chance to show how much he can help the Toronto defense when the Maple Leafs face the visiting New Jersey Devils on Wednesday.

The Devils could provide a test, if their five consecutive second-period goals in a 7-4 win over the visiting New York Rangers on Tuesday night is any indication.

Giordano, obtained with forward Colin Blackwell in a trade with the Seattle Kraken on Sunday, had his first practice with Toronto on Tuesday.

Toronto’s defense and goaltending have often been shaky recently.

“I haven’t been really nervous for a practice in a long time, but I was anxious to get out there and happy to get that one under my belt,” said Giordano, a 38-year-old Toronto native. “It has been a team I’ve followed my whole life. There’s a lot of history with this organization, but it’s special to be able to say that you’re from here and you played for the (Maple Leafs).”

With Jake Muzzin (concussion) not ready for contact, Giordano was paired with Timothy Liljegren in practice on Tuesday. Blackwell played left wing on the fourth line with Jason Spezza and Wayne Simmonds.

Giordano and Blackwell were part of the second power-play unit on Tuesday. Giordano replaced Rasmus Sandin (knee), and Blackwell took the place of Ondrej Kase, who is being monitored after taking a blow to the head in a collision during Toronto’s 6-3 road loss to the Nashville Predators on Saturday.

“It was like another day at the office for (Giordano),” Maple Leafs coach Sheldon Keefe said. “And … really what you’re looking for when you bring in an established veteran player is that they look comfortable right away, like they belong. I thought the same with Blackwell. Confident, comfortable — and I think both guys will be a good fit.”

Keefe added, “The thing that I love the most is that (Giordano) gives us options. It allows for more efficient distribution of minutes, to share some of the workload throughout our group, with having another veteran who can play in all situations. And it’s important for us to try different things. We know that Giordano and (TJ) Brodie have worked well in the past (with the Calgary Flames). We want to get a look at that in blue and white, too.”

While the Maple Leafs have had three days off, the Devils were busy — and victorious — on Tuesday.

New Jersey’s Jack Hughes scored twice to give him 21 goals on the season and 101 career NHL points.

The Devils acquired 34-year-old goaltender Andrew Hammond from the Canadiens before the trade deadline on Monday. Forward Nate Schnarr, who was with the Utica Comets of the American Hockey League, went to Montreal in the deal.

“I tried to make some hockey trades to better our team (Monday), but nothing came about that made sense,” Devils general manager Tom Fitzgerald said.

Hammond said, “My goal is to just be myself and provide a steady presence back there. Make the saves that I’m supposed to make, and maybe a few that you’re not supposed to.”

Nico Daws got the start in net for New Jersey on Tuesday, and he made 31 saves in the win.