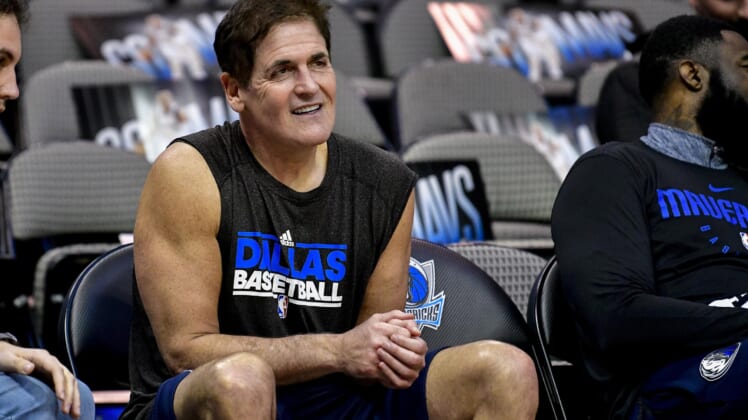 Dallas Mavericks owner Mark Cuban is the most known owner in the NBA and has stepped up as one of the most vocal voices during the league’s shutdown. Now, two months after the league suspended operations due to the COVID-19 pandemic, Cuban opened up about what it will take for the NBA season to return.

As some NBA teams begin to re-open their facilities to allow players to train, Cuban revealed that the Dallas Mavericks won’t open their facility until more COVID-19 testing becomes available. Now, the Mavericks’ owner has opened up about exactly what it will take for the team to return to the court.

If the NBA wants to bring basketball back and fans desire for Luka Dončić to return to the court, Cuban is setting a high bar for player safety. In order to ensure the safety of everyone within his organization and across the NBA, Cuban looks toward the White House as an example to follow.

In an interview with The Athletic’s Tim Cato, Cuban revealed exactly what he wants his team and the league to follow regarding COVID-19 testing during this pandemic.

“I’ll use the White House protocol. The way the White House protects the president and vice president is the way that I want to protect our players and employees, you know? We’ll just try to just copy what they do as a means of knowing when the time is right,” Mark Cuban said, via The Athletic. “As of now, for all we know, for all we’ve been informed, anyways, they’re testing everybody. And they test their top people on a daily basis. And so they have access to the best science, the best information, and so it just makes sense to me that we just copy them.

The White House implemented daily COVID-19 testing for its top officials after a military valet tested positive for the coronavirus, according to USA Today. Due to the ability of the virus to spread quickly, the White House took additional precautions by making sure it could contain the spread of the coronavirus. By regularly testing top officials, it ensures that any potential spread of COVID-19, even by carriers not showing symptoms, is limited.

A lack of testing kits is one of the major issues preventing the NBA from resuming its season. However, with more kits being produced and the league eyeing the model for a return used by the Bundesliga soccer league, a path to basketball returning is possible.

How many COVID-19 tests will the NBA need?

The NBA has the financial resources to buy COVID-19 tests, but the availability for the general public remains an issue. NBA commissioner Adam Silver and team owners don’t want to be taking away thousands of testing kits from cities where the general public might desperately need them.

It’s particularly problematic given the early projections for how many testing kits the league will need. In order to have a full season, league officials currently estimate they will need at least 15,000 COVID-19 tests to resume the regular season and hold the playoffs.

If the league wanted to follow Cuban’s goals and follow the safety protocols used by the White House, the NBA would likely need even more tests. However, it could also help the league be more confident that it will avoid another outbreak that forces another suspension.