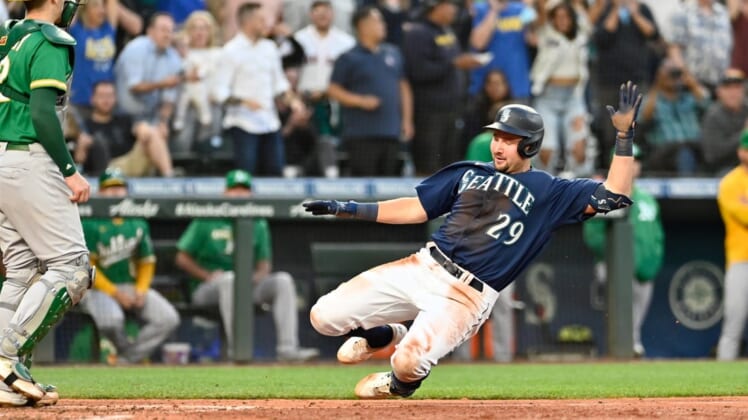 The Seattle Mariners will be without shortstop J.P. Crawford for the entirety of their four-game series against the visiting Oakland Athletics.

Crawford, a former Gold Glove winner, was originally suspended five games for throwing punches in last Sunday’s brawl with the Los Angeles Angels. After an appeal to MLB officials, the ban was reduced to four games.

Crawford sat out Thursday’s 8-6 victory against the A’s, in which his replacement, Dylan Moore, hit a two-run homer, and will also miss games Friday night and Saturday and Sunday afternoons.

“I’m ready to just get it done with,” Crawford said.

Mariners manager Scott Servais said that Moore likely will serve as the shortstop for all four games.

“It’s unfortunate for us, everybody knows what (Crawford) does for us leading off and playing shortstop,” Servais said. “But we will abide by the rules and the rulings that are out there. So, we’ll start with that (suspension).”

Crawford had played in 72 of the Mariners’ first 77 games. He missed two with back spasms and another pair with food poisoning.

Since he returned to the top of the batting order on June 21, the Mariners won seven of nine games entering Thursday.

“I hate not playing,” Crawford said.

Crawford can work out before games, but he can’t be in the ballpark during them while suspended. He said he’d watch the series against Oakland at home with his wife, Kathleen.

“She’s going to be sick of me by the end,” Crawford said.

Rookie Julio Rodriguez also homered for the Mariners on Thursday and catcher Cal Raleigh hit a double and triple and drove in two runs. Raleigh got a “Little League home run” in a four-run fifth inning that broke a 4-4 tie as the relay throw hit him as he slid into third and rolled into foul territory, allowing him to lumber home.

“It was cool,” Raleigh said of his first career MLB triple. “Obviously, it’s a big hit. It’s a one-run game at that point. It put us up four runs, which was huge. … Honestly, I felt like I was playing in Little League again.”

“Opposite-field homers are really impressive and (Laureano) had two of them,” A’s manager Mark Kotsay said. “Offensively, our at-bats were good. We are continuing to make progress on the offensive side, we’re scoring runs, we’re putting up good at-bats, so from an offensive standpoint it was a good night.”

Kaprielian is 1-1 with a 6.26 ERA in seven career appearances against Seattle, including four starts; Gonzales is 9-3 with a 3.94 ERA against Oakland in 17 games with 16 starts. Gonzales is 2-0 versus the A’s this season while Kaprielian is 0-1 in two starts against the Mariners.