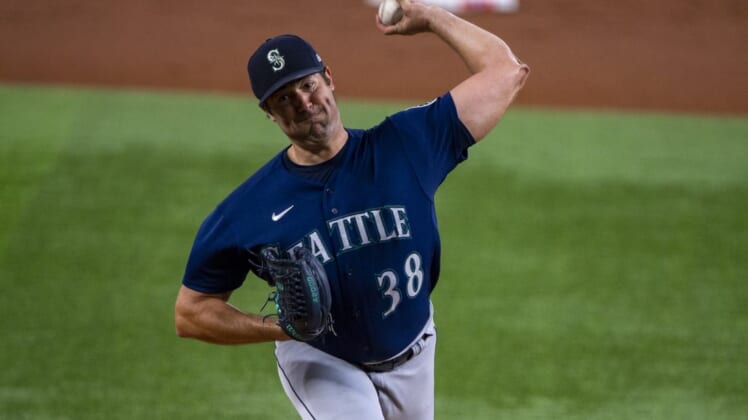 There will be plenty of storylines when the Los Angeles Angels open a four-game series Friday night against the host Seattle Mariners.

This will be the first meeting between the teams since a June 26 brawl in Anaheim, Calif., after the Mariners’ Jesse Winker was hit by a pitch. A dozen players and coaches were disciplined, including a 10-game ban for Angels interim manager Phil Nevin.

The Angels are coming off a history-making, 8-7 loss to the Oakland A’s on Thursday, when they became the first team ever to hit seven solo homers, including two by Shohei Ohtani, and score no other runs, according to STATS.

“I guess they always say solo home runs don’t beat you, but you feel like if you hit seven, you might,” Nevin said. “It didn’t work out for us.”

The Mariners are coming off two wins in a three-game series against the New York Yankees, and they turned their season around after the Angels’ last trip to Seattle on June 16-19.

The Mariners went on to win 22 of their next 25 games, including 14 in a row heading into the All-Star break, to move into wild-card playoff contention in the American League.

The Mariners did it despite Winker, J.P. Crawford and Julio Rodriguez serving suspensions for the brawl, plus a stint on the injured list by Ty France.

Rodriguez, an All-Star like France, is on the injured list after getting hit on the right wrist by a pitch on Saturday.

“Our turnaround here has been driven by a number of different things, but I’ve said it from day one: Our guys come in and they prepare and they’re ready to compete,” Mariners manager Scott Servais said. “I don’t care who’s on the other side coming after us. They’re ready to go.”

Left-hander Robbie Ray (8-8, 4.11 ERA) is scheduled to start Friday for the Mariners. Ray had a sterling seven-start stretch, flashing the form that helped him win the AL’s Cy Young Award with Toronto last season, before being battered in his past two outings against AL West-leading Houston — giving up 10 earned runs in 5 2/3 innings.

“I just need to flush these last two starts,” Ray said. “I know I’m a good pitcher. The stretch that I had right before facing these guys was pretty much as good as it gets. So just put it behind me, get back to the grind.”

Ray is 2-0 with a 0.64 ERA in two career starts against the Angels. He posted Seattle’s lone win in that five-game series in June, going seven innings and allowing one run on three hits, with 10 strikeouts in an 8-1 decision.

The Angels are set to counter on Friday with left-hander Patrick Sandoval (3-7, 3.61).

Sandoval is 0-3 with a 2.83 ERA in six previous appearances against Seattle. He made back-to-back starts against the Mariners in June, allowing just one run in each outing, but he didn’t get a decision in either game.

Angels outfielder Mike Trout (rib-cage inflammation, back) began rotational exercises this week, but there is no update on when he’ll be able to swing a bat.