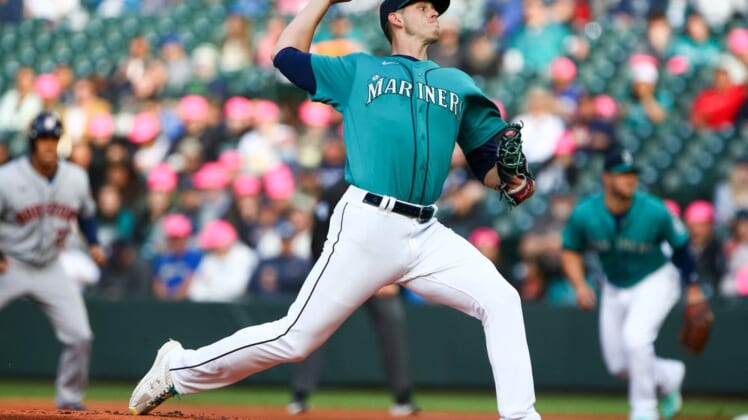 Justin Verlander allowed four home runs, matching the total from his previous eight starts this season, as the visiting Houston Astros took a 6-1 loss against the Seattle Mariners on Friday.

Julio Rodriguez, Kyle Lewis, Ty France and Taylor Trammell went deep for the Mariners, who snapped a two-game losing streak and won for just the third time in their past 11 games.

Seattle right-hander Chris Flexen (2-6), who was 0-5 with a 6.16 ERA in six previous starts against the Astros, went seven innings and allowed one run on seven hits. He walked two and struck out six.

That streak ended in the first inning.

With one out, France grounded a single into center and Rodriguez deposited the next pitch over the right field wall.

The Mariners weren’t done, as J.P. Crawford walked on four pitches, and an out later, the recently activated Kyle Lewis hit his first homer of the season, a two-run shot to left-center to make it 4-0. Lewis, the 2020 AL Rookie the Year, had been out nearly a year after knee surgery.

France hit the first pitch of the bottom of the third over the center field wall, and Trammell, called up from Triple-A Tacoma earlier in the week, did the same in the sixth.

Verlander went six innings and allowed six runs on 10 hits, with his ERA soaring to 2.03. The right-hander walked one and struck out six.

The Astros’ lone run came in the second. Yuli Gurriel led off by grounding a single into center. An out later, he advanced to third on Jeremy Pena’s ground-rule double down the right field line, and he scored on Jose Siri’s grounder to third.

Houston had won four of its previous five games entering the Friday opener of a three-game series in Seattle.