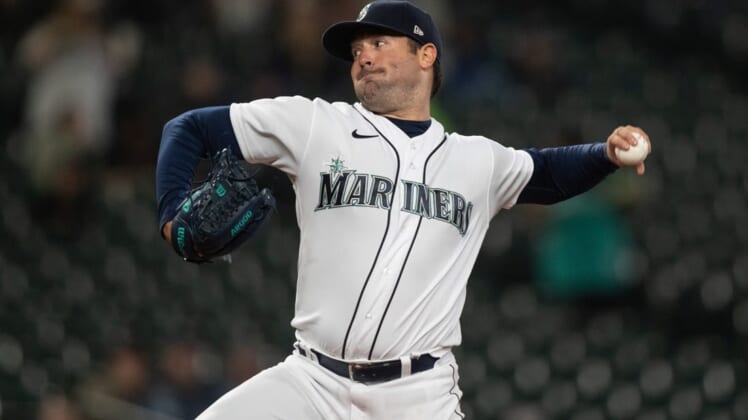 The Oakland Athletics’ Paul Blackburn has been a master at that this season, while the Seattle Mariners’ Robbie Ray, the reigning American League Cy Young Award winner, has frequently been stung by crooked numbers.

The two veterans are scheduled to square off Wednesday afternoon in Seattle in the finale of a three-game series between the AL West rivals.

Blackburn (4-0, 1.91 ERA) has allowed more than one run in an inning just once this season, and that came in the only game among his eight starts that the A’s lost.

The right-hander made 10 starts as a 23-year-old rookie in 2017 but has yet to reach that number since then while dealing with injuries and inconsistency.

This year, he’s among the league leaders in ERA, fewest walks per nine innings and highest ground-ball rate.

“It’s awesome,” Blackburn said. “But I didn’t just get here. This didn’t just happen. Everyone here, the information we get and the people that trust and believe in me, all those go into this. When you see your name (among ERA leaders) with Justin Verlander, it’s cool.”

A’s pitching coach Scott Emerson said of Blackburn, according to MLB.com, “When you get 10 or 11 starts a year, you’re really not settling in. You’re not given that full opportunity. You have to earn it. And the way Paul is pitching, he’s pitching like he belongs.”

Blackburn, who is 1-2 with a 5.95 ERA in four career starts against Seattle, went just 4 2/3 innings against the Los Angeles Angels in his latest start on Friday despite allowing only two runs. He struck out Mike Trout and Shohei Ohtani back-to-back in his final inning.

“Paul did an amazing job,” A’s manager Mark Kotsay said. “It’s a tough situation there to go out and get them. (He) battled and gave us a chance to win.”

“It’s gonna come around,” Ray said. “I just have to stick with the process. My stuff is really good. I’m still punching out eight, nine, 10 guys. The stuff is there. It’s just a matter of one pitch, figuring out that one pitch, buckling down in that inning where things start to go a little haywire. Just breathe and stay calm.”

In his most recent start, Friday against the Boston Red Sox, the game was scoreless in the third when Ray allowed a grand slam to Trevor Story. Those were the only runs Ray allowed over six innings.

“It’s become a common theme, and he knows it,” Servais said. “He’s frustrated by it as well because it sneaks up on him. And it’s not just one run; it’s a crooked number. And that’s what has gotten us the last few times he’s been out there.”

The A’s snapped a 13-game losing streak to the Mariners dating to last season with a 7-5 victory on Tuesday night, evening the series at a game apiece.

“Hitting is contagious,” said A’s leadoff hitter Tony Kemp, who went 3-for-4 and scored three runs. “Someone hits a home run, it makes you want to do the same thing. We just have to stay within ourselves, not put too much pressure on ourselves. Just go out there and try to have fun.”