Mariners push win streak to 9 in opener vs. Nationals 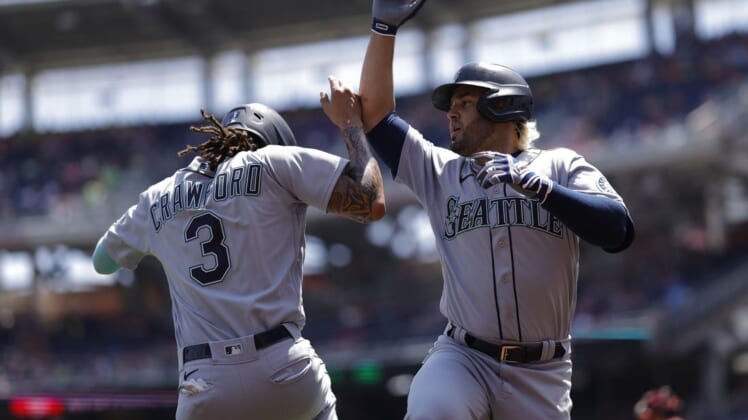 Eugenio Suarez socked a three-run homer in the first inning and the visiting Seattle Mariners extended their winning streak to nine with a 6-4 victory against the Washington Nationals in the first game of a doubleheader on Wednesday afternoon.

Jesse Winker, Adam Frazier and Cal Raleigh also homered for the Mariners, who last won nine in a row during the 2003 season.

Mariners starter Chris Flexen (6-8) won a fourth straight start for the first time in his MLB career. He allowed one run and six hits in six innings, striking out one and walking two.

Paul Sewald got the final out of the game for his 11th save.

Juan Soto hit a three-run homer with two outs in the ninth for Washington, which has lost five straight and 11 of 12.

Suarez provided Flexen with an early lead with his long home run.

Gray walked two of the first three batters before Suarez hit the second pitch he saw 439 feet over the fence in left for a 3-0 lead.

Gray gave up consecutive singles to start the second, but notched his third strikeout before inducing an inning-ending double play.

Winker, in his first game back since serving a six-game suspension for his involvement in a fight with the Los Angeles Angels on June 26, hit a solo blast to center field to open the fourth inning and stretch the lead to 4-0.

Frazier went deep one batter later to make it 5-0.

Flexen gave up his first two base hits with two outs in the third, but got Soto to ground back to him to end the inning.

The Nationals loaded the bases with no outs in the fifth on two singles sandwiched around a hit batter. Washington only managed one run on a sacrifice fly, however, cutting the deficit to 5-1.

Raleigh homered in the ninth to make it 6-1.

Soto came back with his 18th homer of the season to cut the lead to 6-4.