Two of the Seattle Mariners’ best and brightest prospects, Levi Stoudt and Noelvi Marte, are off to strong starts to their 2022 minor league seasons.

The Mariners’ farm system is currently ranked as the second-best in all of baseball. One of the reasons for that is four of their prospects are ranked among the 40 best in the industry, and shortstop Noelvi Marte is No. 11 in that group.

Noelvi Marte off to quick start for Mariners High-A affiliate

While the 20-year-old native of the Dominican Republic had a rough go of it in his limited action during spring training last month, that is to be expected of a player still competing in the High-A ball. However, his lackluster play against the pros didn’t have any lasting effect once he started his 2022 season with the Everet AquaSox.

Related: MLB power rankings – Which team is in the top spot to start the season?

Marte has gotten off to a promising beginning to the new season. Along with wowing fans with an inside-the-park home run during the AquaSox win last week, he has racked up two home runs, five runs batted in, six runs scored, and seven walks in 32 at-bats. His current slash line is .250/.385/.438.

Last season he split time between Single-A Modesto and Everett. Combined, he hit .273/.366/.459 with 17 homers, 91 runs, and 71 RBIs and earned All-Star honors. He is expected to reach even better heights as he continues to assimilate to High-A play.

When it comes to the pitching side of the farm system, Levi Stoudt is a talent the team has high hopes for. While he was unable to land a spot in the rotation during spring training, it is only a matter of time before he ends up pitching games in T-Mobile Park. Like Marte, he did not let a disappointing result in spring training get him down heading into his season with the Double-A affiliate Arkansas Travelers

Stoudt’s primary goal to start this season will be to continue to hone his fastball. He has shown signs of that early in the 2022 season after having eight strikeouts and no walks in a six-inning performance last week. He already has a plus offspeed pitch that impressed the big league team’s manager Scott Servais in March. 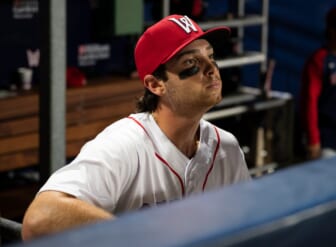 Over two starts so far this season, Stoudt has posted a 2.45 ERA, 11 Ks in 11 innings, and a has a sparkling 0.73 WHIP. Expect him to work his way up to Triple-A during the season and possibly have an outside chance to land in Seattle towards the end of the 2022 major league season.