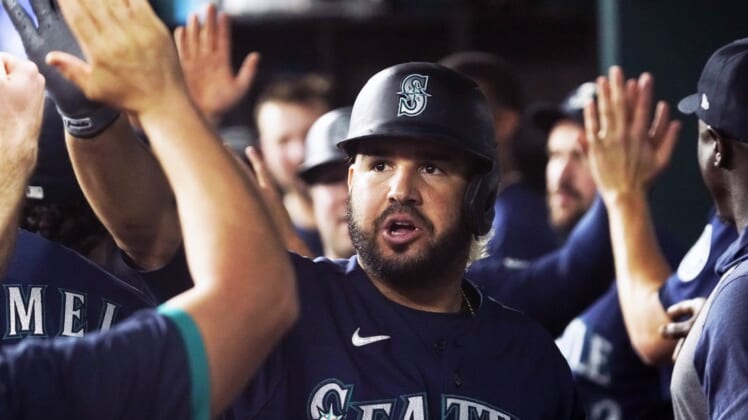 Eugenio Suarez atoned for a costly error by hitting a two-run, opposite-field home run in the ninth inning that lifted the Seattle Mariners to a 4-3 win over the Texas Rangers in Arlington, Texas.

The Mariners rallied to claim the opener of a three-game series, their fifth win in seven games.

With Texas up 3-2 entering the ninth, J.P. Crawford drew a one-out walk from Joe Barlow (1-1), and Suarez followed with his 10th home run of the season, a shot to right. Suarez had a three-RBI night.

Barlow had been 9-for-9 in save chances this year.

Paul Sewald worked around a two-out walk in the bottom of the ninth to recorded his third save.

The Rangers had grabbed a 3-2 lead in the seventh on Nathaniel Lowe’s solo home run off Roenis Elias.

Both starters impressed, but they were not involved in the decisions.

Mariners right-hander Logan Gilbert was charged with two runs, one earned, on five hits in six innings. He struck out seven and walked one.

Gilbert was cruising into the sixth inning, clinging to a 2-0. However, Rangers took advantage of Suarez’s throwing error from third base that allowed Marcus Semien to reach. After Semien stole second, Corey Seager lined an RBI double. Kole Calhoun’s run-scoring double to left made it 2-2.

The Mariners opened the scoring with a run in the fourth inning, capitalizing on a hit batter. Dunning plunked Ty France on the arm, and France advanced to third on Crawford’s one-out double to left. Suarez lifted a sacrifice fly to left, scoring France.

Seattle doubled the lead in the fifth inning on a home run by Cal Raleigh, who blistered a shot to right off Dunning. The long drive was his fifth of the season, the second hit of the night for the Mariners’ No. 9 hitter.