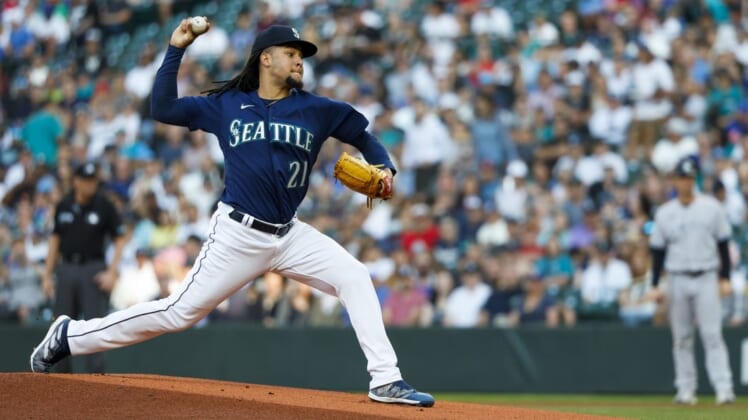 Two newcomers who have experienced early success for their current teams will get introduced to an American League West rivalry when the Seattle Mariners and host Oakland Athletics complete a three-game series Sunday afternoon.

With their clubs having split the first two games of the set, Mariners right-hander Luis Castillo (5-4, 2.73 ERA) and A’s lefty JP Sears (4-0, 1.95) are slated to face the opponent for the first time after moving west at the trade deadline.

Castillo is 1-0 with a 2.18 ERA in three starts since being acquired from Cincinnati for four minor-leaguers. The Mariners have won all three games, extending his streak of unbeaten starts to 10 dating back to his days with the Reds.

The 29-year-old has never pitched against the A’s. He’s never lost to an American League West opponent in his career, going 2-0 in three starts.

“We thought we were acquiring him at the right time. He is right now at the pinnacle of what he does,” Mariners general manager Jerry Dipoto observed this week. “His command, the pitch quality, the consistency and the size of his menu. … We’re seeing the best version of Luis Castillo, and there’s no reason why this can’t continue moving forward. He is super-talented, he’s a great guy, and I think he’s just realizing how good he is and can be.”

Likewise, the A’s are very excited about what they’ve seen of Sears, a 26-year-old acquired from the New York Yankees as part of the package for starter Frankie Montas.

Sears has been impressive in two starts for the A’s, allowing two runs and seven hits over 10 1/3 innings. He’s coming off five innings of shutout ball on the road against the Texas Rangers in a 5-1 win on Tuesday.

The rookie has never faced the Mariners.

Veteran A’s catcher Stephen Vogt gave the Mariners a heads-up on what to expect.

“JP throws the ball well,” he said after the win over the Rangers. “That’s a really good fastball, and the slider was a very good pitch. He got some weak contact on the change-up as well. Three very good pitches and he commanded it well. Really excited to have him here, and it was really fun to catch him.”

Sears will see a team that has bunched two doubles, two triples and two home runs among their 20 hits in the first two games of the series. Eugenio Suarez has four of the hits, including a triple and two homers, and has driven in six of Seattle’s 13 runs.

The Mariners won the series opener 10-2, before seeing a four-game winning streak come to an end in a 4-3, 10-inning defeat on Saturday.

Two players who did not start Friday’s game against a left-hander — Tony Kemp and Cal Stevenson — were Oakland’s hitting stars in the rematch. Kemp had a two-run single among two hits, while Stevenson, promoted from the minors for the first time 11 days ago, had the first two-hit game of his career, including his second double.