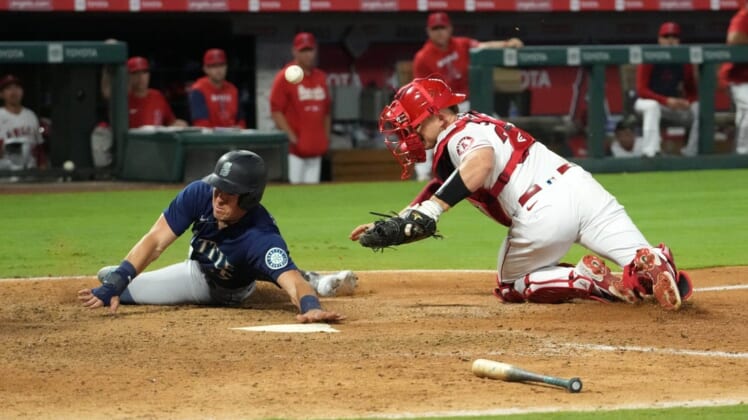 It certainly worked for the Mariners on Monday night, as they scored four runs in the top of the ninth inning to defeat the Los Angeles Angels 6-2 in the opener of a three-game series.

The Mariners’ winning rally was sparked by Sam Haggerty, who singled with one out, took second on a throwing error by catcher Max Stassi and stole third. Following a walk, Julio Rodriguez hit a liner off the glove of second baseman Luis Rengifo, who picked up the ball and threw home. Haggerty was caught in a rundown but scored when nobody covered the plate after Stassi chased him back toward third.

Pinch-runner Dylan Moore advanced to third on the play and scored on Ty France’s grounder to shortstop Andrew Velazquez when the ball popped out of Stassi’s glove as he tried to make the tag.

“How many plays at the plate can you have in one inning?” asked Servais, a former major league catcher. “We put a ton of pressure on them, especially (Haggerty). … We forced them to make plays and they couldn’t. They (Haggerty, Moore and Rodriguez) have no fear on the bases. You’ve got to let them go and take advantage of (the speed) they have.”

“It was awful,” Angels interim manager Phil Nevin said. “We just made some bad decisions, some bad throws. We didn’t execute a rundown. Yeah, it wasn’t good.”

Those weren’t the only strange plays.

Center fielder Rodriguez and right fielder Mitch Haniger collided in midair at the wall on Rengifo’s drive in the first inning. Rodriguez had the ball in his glove, but it popped out when he was hit by Haniger and glanced off the scoreboard just over the yellow home-run line, allowing Rengifo to trot home after a video review.

“It started out as a normal game with two great starting pitchers and got crazy at the end,” Servais said.

It could be more of the same Tuesday if history is any indication.

Ray is 2-0 with an 0.86 ERA in three career starts against the Angels. Two of those have come this season. He beat them 8-1 on June 17, allowing one run on three hits in seven innings with 10 strikeouts. Ray didn’t get a decision in a 4-3 loss on Aug. 5 despite allowing just one run on five hits in seven innings with 10 strikeouts.

Suarez is 4-1 with a 3.38 ERA in nine career appearances vs. the Mariners, including seven starts. He is 1-0 in two games against them this season.

He didn’t get a decision June 18 at Seattle when he was pulled after 4 1/3 innings of a 3-0 victory. He came on in relief after the June 26 brawl between the teams, allowing one run on five hits over six innings with eight strikeouts to get the 2-1 victory.